On Wednesday, the NBA world finally received the news that it had been patiently awaiting since the word broke that superstar James Harden was unhappy with his longtime team, the Houston Rockets: Harden was on the move. Furthering the fervor, he was on his way to form the league’s newest superteam alongside fellow All-NBA level players Kevin Durant and Kyrie Irving. The deal had been rumored for months, but its official agreement sent the basketball community into a frenzy.

With many fans taking sides in regard to which team they believe won the deal, now is as good a time as any to dissect the ins and outs of the swap, and see who history will look back on as the winner. Every team, including the Indiana Pacers and Cleveland Cavaliers, will get a grade, but Houston and Brooklyn will get lengthier explanations, seeing as they are the “primary,” parties involved.

In deals that involve this many teams, there is often one that emerges from the fire having received real value out of the trade without giving up much in return. In this case, Cleveland is the freeloading benefactor. Exum has been a non-factor for the Cavaliers this season, playing in just 6 games due to a calf injury and putting up a measly 3.8 PPG in under 20 minutes a night. He was a serviceable backup guard, but nothing compared to what Cleveland got in return.

The Cavs turned Exum and a second rounder into Allen and Prince, two great young pieces that will likely be key parts of their rebuild, particularly Allen. The Texas product was having the best season of his young career thus far, offering great shot blocking and rebounding, and I have no doubt he will be spectacular for his new team. As many have pointed out, Cleveland now has a massive logjam at the Center position, but they will likely let Andre Drummond walk this offseason, freeing up the spot for Allen.

Kudos to the Cavaliers for getting in on this deal, because they emerged with solid returns for a minimal investment.

This was essentially a lateral move for Indiana, who swapped former All-Star Victor Oladipo for a younger, less expensive, albeit slightly worse version. Oladipo’s contract is expiring this offseason and was due $21 million this season, whereas LeVert has three years left on a deal that only owes him an average of $17.5 million annually. The days of Oladipo donning a Pacers uniform and pushing LeBron James and the Cavaliers to 7 games seem long forgotten, and both sides seemed to be ready to part ways. Depending on how many touches he gets in Indiana, LeVert could blossom into a much bigger star than he could have behind Irving and Durant in Brooklyn.

Both players are in similar tiers and accomplish similar things. If Indiana is looking to maintain their current core of Brogdon, Sabonis, and Turner for the long term, then swapping out the expiring Oladipo for LeVert will likely work out favorably down the road. It’s difficult to see Oladipo go, but it seems to be for the best. 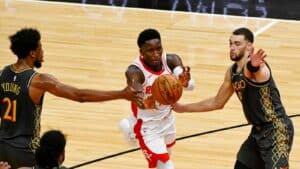 Having to deal the superstar with which you’ve achieved so much success is always an extremely difficult thing to do for any NBA franchise. It is a bitter moment for the fanbase, and a sad resignation that the previous era has drawn to a close. In Harden’s case, he acted so belligerently that Houston may still have been sad to see him go, but were happy to get the enormous headache that he was becoming off their hands. They also chose a more long-term focus in their return for the star, a smart move that many star-trading franchises are becoming wise to. They made out spectacularly in this deal.

The amount of draft capital that Houston received for Harden is frankly obscene. Four 1st round picks and four pick swaps is an unfathomable haul for any player, let alone a 32-year old on a massive contract. I say that not to disparage Harden, but to point out that this one exchange will have the Rockets in prime draft position for nearly a decade. No matter how good a player is, that is substantial.

And, as many have pointed out, Houston is bound to be competitive for the immediate future. John Wall and Christian Wood are solid pieces, and the newly acquired Victor Oladipo could make a significant difference in the push toward the postseason. Even if they fall short of the playoffs and fail to re-sign Oladipo this offseason, it’s difficult to imagine that the Rockets would be uncompetitive over the next few years.

From Houston’s perspective, this trade reminds me a lot of the Paul George to Los Angeles deal. Both received a huge amount of draft picks in exchange for their star, and will attempt to remain decent in the midst of a rebuild. Looking back, with the Clippers’ playoff shortcomings, Oklahoma City is seen as the clear winner of the deal, and I believe a similar sentiment could be adapted with this one.

The news of Harden’s departure was undoubtedly difficult for everyone involved with the Houston Rockets. However, in addition to all the 50-point performances and dazzling step back threes, the former MVP has left them with one last parting gift: a key with which to unlock their future.

Determining how the Nets made out in their trade for a third superstar comes down to one crucial question: if Brooklyn wins even one championship with Durant, Harden, and Irving, will this deal be worth it, no matter how catastrophic its long-term implications turn out to be?

Your answer to that question will likely determine whether or not you think the Nets were mercilessly hoodwinked or made out like bandits. Harden is the type of player that seldom comes on the market, and one that can exponentially increase a team’s championship potential. Even so, is he, or any player, worth sacrificing this much of your franchise’s future? As you can see by the grade I have given, I don’t think so.

In terms of the amount of draft picks forfeited, this deal is eerily similar to the one Brooklyn pulled the trigger on all those years ago for Paul Pierce, Kevin Garnett and Jason Terry. As we all know, the trio flamed out in Brooklyn, and they were forced to watch as Boston collected their picks for the next for four of the next five years, including one that ended up No. 1 overall. It was widely considered one of the most boneheaded moves in league history, and now the same team has executed one of almost identical ilk.

Now, Brooklyn is getting a much more desirable package in this deal, and their championship likelihood with their current trio is much higher than it was when they dealt for Pierce, Garnett, and Terry. But that does not eliminate the drastic, ill-advised ambition present in this deal.

The year is 2021. The next time Brooklyn will have the rights to their first round pick is 2029.

That sentence should terrify anyone looking to build an NBA franchise that will succeed long-term. Even if Brooklyn manages to win a championship within the next 2-3 years, would it be worth nearly a decade of potential rebuilding without the ability to replenish through the draft? Many may say yes. However, a championship is far from a guarantee. And if the Nets fail to secure the Larry O’Brien trophy, then this deal could be viewed as one of the worst in the history of basketball.

That being said, I think the Nets have a very realistic chance of winning a title in the very near future. But the obvious uncertainty of that task, as well as the catastrophic ramifications if it is not accomplished, earn them their current grade.

Overall, I think all four teams in this trade got what they wanted. Cleveland bolstered their young core, Indiana got younger and cheaper, Houston offloaded their star and received a king’s ransom in exchange, and Brooklyn legitimized their claim as title contenders. Whether or not these goals work out in the end remains to be seen. We may look back on this unforgettable blockbuster as the re-ruining of the Nets and the dawn of Houston, or as the domino that set Brooklyn’s dynasty into motion.

We’ll just have to wait and see.