In the midst of a brutal start to the 2021 season, the Los Angeles Lakers did not receive any merry holiday respite in their Christmas Day contest. No wish lists were checked off, and no carols were sung in the postgame locker room.

What L.A. did receive was a package far more unpleasant, yet potentially more beneficial in their long-term quest for an NBA championship. A realization, a wake-up call.

With a 122-115 loss to the depleted Brooklyn Nets, the Lakers fell to 16-18, adding another defeat to a streak of losses that has now reached 5. With such bleak results, one may assume that nothing is going right for L.A. at the moment, that their entire roster is collectively contributing to their disappointing slump.

But that assumption would be incorrect, thanks solely to the continued excellence of the Lakers’ leading man, LeBron James. Across his team’s 5-game skid, James is averaging 31.8 PPG, 9.8 RPG, and 5.2 APG, including a 39-point masterpiece in the Christmas Day loss. On the season, James is averaging over 27 points per contest, while shooting over 51% from the field and sporting a TrueShooting% of 61.4. All told, it is a combination of scoring, efficiency, and playmaking not seen from The King in several years.

On the surface, it appears James is merely elevating his play when his team needs him most, doing everything he can to keep a struggling roster afloat. While that is not untrue, it comes with a concerning caveat that calls into question the sustainability of his success, particularly at 36 years old.

Across 22 games this season, James is playing an average of 37 minutes per game. It is his most since the 2016-17 season, and just his second season over 37 MPG since his days with the Miami Heat. This uptick in time on the court has been necessary for the Lakers to remain competitive, but it is terribly unideal considering the additional wear and tear it places on James’ body.

Throughout the first 11 seasons of James’ career, he played an average of 39.4 minutes per game. This period consisted of his first stint with Cleveland as well as his years with the Heat. At this time, when James was at his physical peak, he was expected to play grueling night after grueling night, with little concern about how it would affect his performance later in the season. Relying on James to bear the weight of the team on his shoulders was a consistent, even maintainable strategy.

But over the course of decades, that reliance begins to add up. James currently sits at 4th on the All-Time minutes list, but with over 200 fewer games played than leader Kareem Abdul-Jabbar, James has racked up his total more quickly than any player in NBA history. His mileage is unprecedented.

That physical toll is what inspired the Lakers to use James as lightly as they did during his first three seasons with the team. Averaging just 34.4 MPG from 2019-2021, they recognized that in order to maximize the impact of their worn, 36-year old superstar, they could not run him into the ground the way he had been when he was 26.

But never before during James’ time in L.A. has there been such a glaring need for his contributions. Despite acquiring Russell Westbrook in the offseason to alleviate some of James’ playmaking load, the Lakers have been forced to rely on James’ scoring more than ever before, with few other players on the roster living up to expectation.

This was epitomized in their Christmas defeat, when the Lakers were particularly hapless during James’ few minutes on the bench: 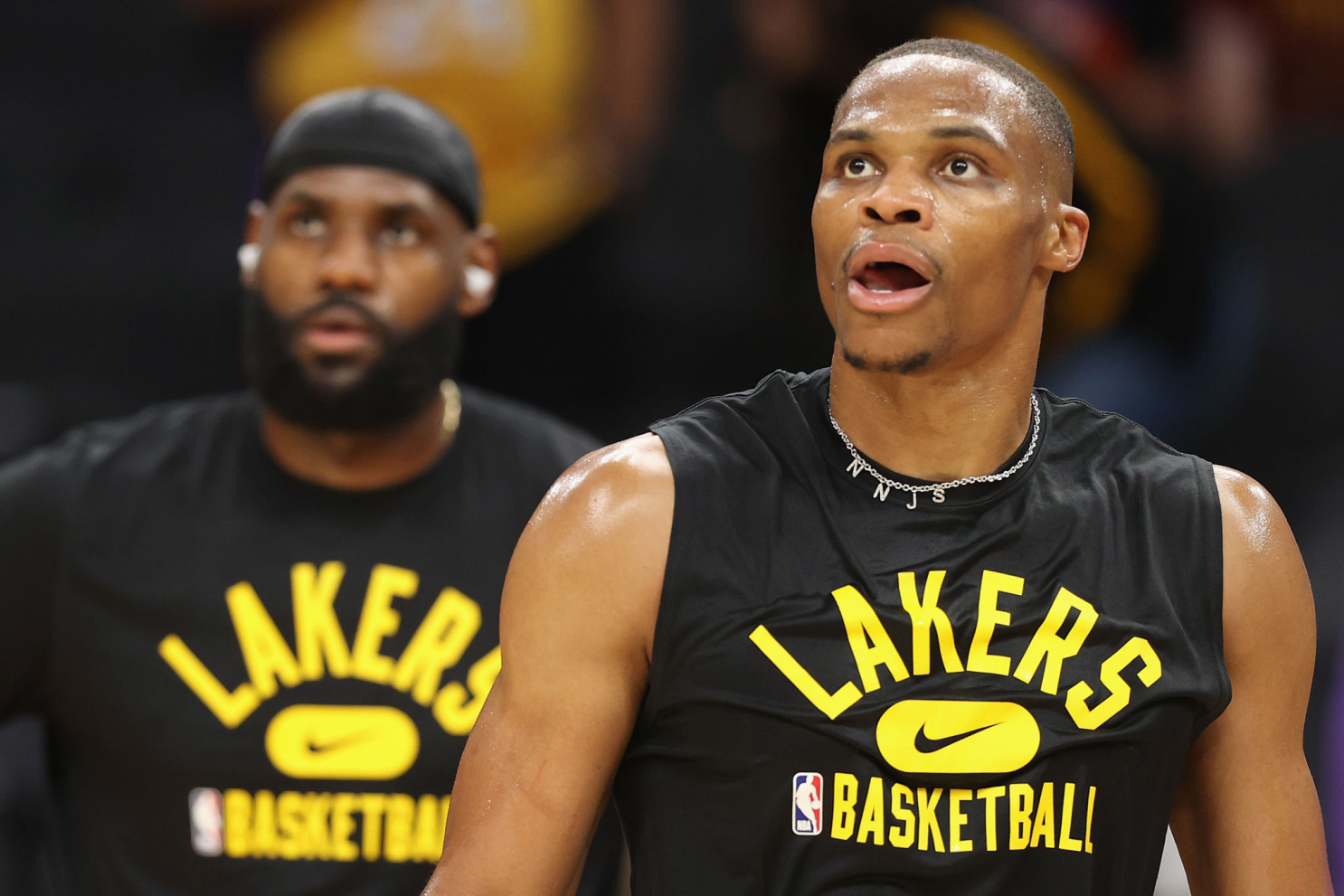 While James’ teams are always better with him on the floor than off it, the combination of the Lakers’ struggles without James, their heavy utilization of him, and their lack of success even while playing him so frequently are what make the current situation particularly alarming.

James maintaining such a high level of play at his age is virtually unprecedented. But both James and the Lakers aspire for much greater success than James putting up 39 points in a regular season loss. They want a return to the mountaintop, a reclamation of their previous championship form. And necessary as it may seem in the interim, relying upon James this heavily is not the abiding solution.

The Nets are experiencing a similar issue with their superstar, Kevin Durant. Durant is also playing 37 MPG, his most since his MVP season with the Oklahoma City Thunder in 2014. This increased floor time has given way to some spectacular performances from Durant, and the Nets are in a better place record-wise than the Lakers are, but the load their leader is carrying is similarly troubling.

“I don’t know that we can continue to lean on him the way we have. It doesn’t feel right,” Nash said earlier this month. “I know he’s enjoying it. I know he’s enjoying playing at the rate he’s playing at and trying to bring his teammates along with him and all the responsibility that he has accepted […] Basically it’s just been incredible, but at the same time we know that’s not safe or sustainable.”

Durant’s situation is comparable, but James’ is undoubtedly more dire. James is older, has more overall damage to his body, and leads a team that is far less equipped to win without him than Durant’s. With James Harden returning to the lineup and Kyrie Irving on the brink of his season debut, it is only a matter of time before Durant sees his burden eased. But with Anthony Davis injured and Westbrook’s consistent inconsistency, there is no such savior on the way for James.

This faces the Lakers with a difficult debacle: rest James more, and lose more, or continue to play him heavily, putting further stress on his aging body, and risk losing anyway. Neither option is especially enticing, and the decision is only further complicated by their 7th place playoff standing, as well as their difficult schedule during the second half of January, when 4 of their 6 games are against playoff teams. Whether they like it or not, the Lakers will be forced to choose between short-term survival and long-term achievement, with neither fully guaranteed.

James has long been a player capable of single-handedly leading his team to success. That remains the case, but for his team to reach their greatest potential, their usage of his power must adapt.