Tyrese Maxey is Blossoming in the Light

The Philadelphia 76ers began the season searching for optimism. After an offseason of drama surrounding star Ben Simmons, Philadelphia tipped off their opening night matchup without the former All-Star on the court, and the general attitude surrounding the team boiled down to a single assumption: until Simmons returned or the 76ers traded him away, their season would essentially be an extended holding pattern.

Since then, Joel Embiid, Tobias Harris, and Seth Curry have all missed time due to various ailments, and yet Philadelphia sits at 8-6, sixth in the Eastern Conference, and brought the defending champion Milwaukee Bucks down to the wire last Tuesday without any of the three previously mentioned contributors. The season is not lost without Simmons– in fact, his absence has provided the shine necessary for one of the 76ers’ young stars to bloom. That blossoming breakout is the primary reason Philadelphia remains a force to fear each and every night.

The budding star in question is Tyrese Maxey, a second-year Point Guard out of the University of Kentucky. During his rookie campaign, Maxey mostly remained in Simmons’ shadow, and split reps as the Sixers’ bench ball-handler with Shake Milton. He showed flashes of excellence, (including a particularly memorable 39-point explosion, the most points by a Philadelphia rookie since Allen Iverson) but was never given the playing time necessary to see sustained success. With Simmons out, opportunity is no longer an issue.

Maxey has started at Point Guard in all 14 of Philadelphia’s games this season, the conductor of an offense that leads the league in Offensive Rating (114.3.) He plays with a fervent energy, driving offensive motion and knifing through the opposing defensive front. One of the main concerns surrounding the Sixers sans Simmons was stagnation on the offensive end, something Simmons often prevented with his playmaking and drive-and-kick ability. Maxey has stopped Philadelphia from falling victim to basketball’s cardinal sin on a similarly consistent basis, and added an element to their attack that Simmons lacked entirely: shooting.

Though Maxey’s 30% 3P efficiency during his rookie season still dwarfed Simmons’ perimeter shooting ability, the former has taken a significant leap forward during his sophomore season. He is currently shooting 41.3% from three this season on over three attempts per game. Although this is relatively low volume, Maxey’s encouraging efficiency as well as the signs of progress he is demonstrating are very promising for both his present and future as a jump shooter. 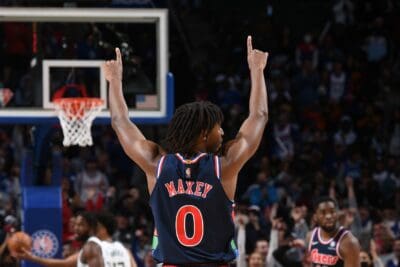 Shooting is not the only area where Maxey has developed. Significant statistical improvement was to be expected given the expanded role he is receiving, and that is exactly what has materialized. Playing in nearly double the minutes he did a season ago, Maxey’s points, rebounds, and assists have all also seen nearly a two-fold increase. Again, it is no mystery that more minutes typically equals more production, but it shows Maxey’s commitment to capitalizing on the opportunity he has been given. He is also a much more reliable shot-maker than he was as a rookie, jumping from 53.1 TrueShooting% to 60.7, and his shooting splits are only a few Free Throws away from the hallowed 50/40/90 threshold (51.9 FG%, 41.3 3P%, and 87.5 FT%.)  Efficiency is a figure that can often be hindered by increased offensive responsibility, but Maxey has only seen his improve.

Outside of pure statistics, watching Maxey play leaves little doubt regarding his ability to maintain his current level of success. He knows when to drive, when to shoot, and when to pass, and demonstrates a clear poise and comfort on the court far more advanced than most second-year players. His most innate capability is as a slasher and finisher, where he makes up for his 6’2” frame with abundant fearlessness and a soft touch around the rim. Again, while he is still developing as a shooter, creating his own perimeter opportunities off the dribble is a skill Maxey already possesses, and any shooting prowess from the Point Guard position is a new tool for Doc Rivers and a new dimension for the 76ers offense.

Maxey is not identical to Simmons, and has therefore not perfectly filled the void he left behind. Particularly on defense, while Maxey is persistent and pesky, his aforementioned stature makes him much less of a force than the 6’10”, DPOY runner-up Simmons. This disparity is especially noticeable when Embiid sits, as it leaves no deterrent for paint-centric ball-handlers like Giannis Antetokounmpo and Julius Randle, who each put up 31 points and led their teams to victory agaist Philadelphia last week.

But perfectly replacing Simmons has never been the expectation for Maxey. He is a different player that carries a different skill set, and offers luxuries that Simmons did not while also forfeiting some of the elements that made Simmons a star to begin with. All that can be reasonably desired from Maxey is to take advantage of the chances that he is afforded, and that is an objective he has both met and surpassed.

The 76ers continue to flourish, and much of that is due to the play of their lead guard. If one had read that statement a year ago, they would likely think it is referencing an entirely different player than Maxey, and yet it remains undeniable. Many of the greatest players need only the slightest bit of sunshine to start their emergence, and if the beginning of this season is any indication, Tyrese Maxey has only just begun to grow.

All statistics are courtesy of Basketball Reference.