Will Defense Doom the Nets? History Says It Could. (Part 1)

When a team as star-studded as the one the Brooklyn Nets have assembled comes together, the first thought of many basketball fans is “What will be this group’s undoing?”

In Brooklyn’s case, it wasn’t difficult to determine what aspect of the game would be their biggest weakness. With a ridiculous offensive trio of Kyrie Irving, James Harden, and Kevin Durant, the Nets would be immensely difficult to stop, but conversely, they would be just as easy to score on. Concerns regarding the Nets’ defense have been present from the moment the trade for Harden was announced, and through their first stretch of games together, they have come to bountiful fruition. Brooklyn has been porous defensively– and not just for the modern day, but historically bad. Perhaps they’re named after the net because of how often their opponents find the bottom of it.

But does it really matter?

Determining just how harmful the Nets’ defensive woes will be for their long-term championship aspirations requires a deep dive into just how bad they are on the less glamorous end of the floor, how dominant they are on the other, and the success of teams like them throughout NBA history. This will be a two part article, as a topic as complex as this one requires a lengthy breakdown, far too extensive for a single post. Part 1 will deal with an assessment of Brooklyn’s defensive personnel (or lack thereof) and where their shortcomings in stopping their opponents rank in the anals of history and the league today. Part 2 will detail how their offensive capabilities will potentially offset their defensive struggles, and how their contemporaries have fared in the past. All this to attempt to answer one key question: Will defense doom the Nets?

First off, we need to understand what makes Brooklyn so bad defensively in the first place: their complete lack of solid individual defenders both on the perimeter and in the paint. In the modern NBA, teams generally commit to one of two defensive identities: protecting the paint or limiting perimeter scoring. Certain elite teams, like last year’s Milwaukee Bucks, can accomplish both even while focusing on only one, but others, like this year’s Nets, cannot effectively do either.

Since trading for Harden, the Nets have run about an 8-9 man rotation, at least in the games where all three of their superstars play. After trading away Jarett Allen, Taurean Prince, and Caris LeVert, and losing Spencer Dinwiddie to injury, that rotation contains almost no reliable defenders. Let’s take a look at a player-by-player breakdown.

This chart is based on Defensive Box Plus Minus, or DBPM for short, for the 2021 season. It essentially dictates how an individual player aids their team defensively during their time on the court. 0.0 DBPM is league average.

As you can see, in terms of individual defensive players, the Nets are severely lacking in almost every area of the court. They only have two plus-defenders, Durant and Jordan, and Durant’s DBPM stands at a measly 0.1. According to this statistic, their only legitimately above-average player defensively is Jordan, and even his performance has been much maligned since Allen’s departure, as he has struggled to contend with many of the league’s elite big men. Here are some of the performances Brooklyn has given up to opposing bigs since acquiring Harden and losing Allen, and how many points those teams scored in the paint total: 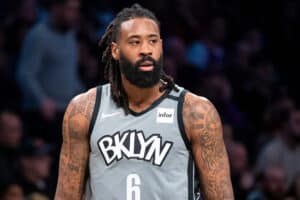 Jordan may be statistically Brooklyn’s most sound defender, but his matchups are still likely to have their best game of the season when facing him. It is worth noting that in the games listed above, Brooklyn’s record was 4-3, which gives credence to the nation that they might not need to slow down their opponents in order to win, but more on that later.

For the season as a whole, even factoring in the games in which they add Allen’s contributions, the Nets are 29th in the league in limiting points in the paint, giving up an abysmal 51.6 per contest, only slightly less than the middling Sacramento Kings.

The lone bright spot for Brooklyn defensively is that they are slightly above average in stopping the 3. They are 12th in opposing 3-pointers per game, and 7th in opposing 3-point percentage. However, this is not to say they are adept at limiting scoring from the perimeter. Every Nets opponent salivates at a guard rotation of Irving, Harden, Harris, and Brown, and rightfully so, given some of their performances:

This bevy of poor showings has taken place all within the span of a few short weeks, as Brooklyn has demonstrated that even the boldest predictions for their defensive lows may have been too conservative.

The Nets defense has also hit some other historically dubious depths in their first stretch of games. According to StatMuse on Twitter, after the Nets’ loss to Washington, they had a defensive rating of 119.9 since acquiring Harden, which would be the worst in the history of the NBA. Let that sink in.

Both of the highest scoring performances by any team this season have come against the Nets, giving up 149 to the Wizards and 147 to the Cavaliers, both in losses (though the latter went to 2OT, so the scoring was inflated.)

Since the Harden trade, the Nets have held their opponent to under 115 points just one time, and given up an average of 124 PPG. That ranks dead last in the league by over 3 points.

All this to say that no matter how you slice it, the Nets’ defense is absolutely putrid. Worse than anyone could have expected. While this is a very small sample size, there is no reason to believe that their performance will improve moving forward (unless they acquire a piece at the trade deadline.)

But can anything, even a defense this terrible, derail a team with as much offensive starpower as the Nets?

Tune into Part 2 to find out!