As the 2023 NBA season draws closer than ever, every team will attempt to answer one central question: what does it take to win an NBA championship, and does their roster have it? There are countless factors to consider, but in the muddled mess of advanced stats and lineup plus-minuses, team defense has emerged as one of the most consistent predictors of success.

If you want to be a great NBA team, your first step should be becoming a great defensive team. And while it is easier said than done, great defense has an uncanny ability to separate the true contenders from the rest of the pack. Let’s look at the teams that have the best chance of capturing that elusive magic this season.

The Warriors’ second place-finish in Defensive Rating last season was outdone only by their first place finish in the standings. Golden State once again rode their efficient two-way attack to a title, their fourth in eight seasons. But their run as a defensive juggernaut is just as impressive.

Here is where the Warriors have ranked in Defensive Rating each year since the start of their dynastic run:

With the exception of 2020, a year in which Golden State was snakebitten with injuries and the season was cut short by the pandemic, the Dubs’ average defensive finish is roughly 5th. They scheme more effectively than any other team in basketball, and possess a roster-wide commitment to the defensive end that makes them elite year in and year out. 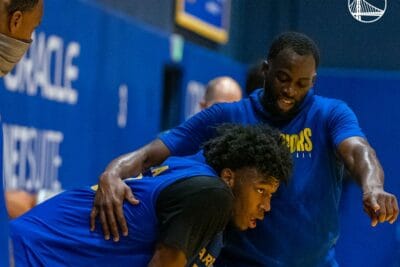 As the Warriors look to repeat in what could be the final season with their original nucleus intact, it is safe to expect that they will once again be a very difficult team to score on. Former DPOY Draymond Green will continue to captain the effort, while James Wiseman, finally healthy, provides a chance at rim protection the group has not seen since Andrew Bogut.

As the Warriors look to defend their title in 2023, defending the basket will prove critical to their effort. If recent history is any indication, that should not be an issue.

When the Knicks shocked the basketball world and earned the 4th seed in the Eastern Conference in 2021, it was on the back of their defense. With the fourth best rating in the league that season, New York was able to grit their way to a level of play that made Madison Square Garden a much less enjoyable visit. 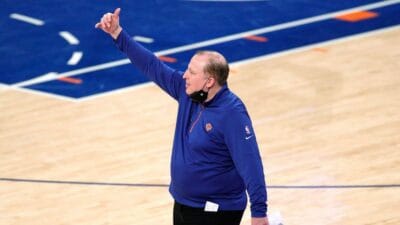 Mitchell Robinson will continue to provide length as a defensive anchor, while RJ Barrett has shown continual improvement on the wing, stating at the start of last season that he wanted “to be first-team all-defense.”

The biggest reason to buy in on the Knicks’ defense is the architect behind it: coach Tom Thibodeau. His vaunted defensive scheme, focused on keeping opposing offenses out of the paint and contesting every shot, has yielded bountiful success throughout his career, dating back to his time with the Chicago Bulls in the early 2010s. With Thibs at the helm, the Knicks should be confident in their group’s defensive philosophy.

After missing out on the long-rumored Donovan Mitchell trade, New York will need to reinstate what made them successful in the past. And as recently as two seasons ago, defense was the author of the greatest Knicks season in a very long time. Look for a return to form in 2023.

After going all-in on a championship chase several years ago, this season provides an unparalleled opportunity for the Clippers to secure a return on their investment and reach heights the franchise has never seen before. Former Finals MVP Kawhi Leonard is back in action after missing all of last season, and the Clippers are a popular pick to come out of the Western Conference.

That potential Finals bid starts with the play of Leonard and co-star Paul George, but it ends with whether or not the Clips are able to realize their defensive potential. With one of the most adept two-way tandems in the league and a roster teeming with depth, LA has no excuse not to be a serious defensive threat. Last season, despite their middling 42-40 record, the Clippers sported the 8th best defensive rating in the league. It came in part due to the play of big man Ivica Zubac, whom the Clippers have transformed into a paint-defending monster. Though we may see a fair amount of small-ball lineups that exclude Zubac, he will make his presence felt while he is on the floor.

The truly exciting thing about the Clippers’ defensive potential is the amount of plus defenders in their rotation. Robert Covington and Norman Powell are effective pieces, and new lead guard John Wall has previously shown flashes of elite defense at the point of attack. Whether or not LA fulfills their defensive destiny will go a long way toward determining the fate of their title push.

Though defense is difficult to predict, these teams have what it takes to give opposing offenses nightmares. We will see just how bad those nightmares are when the season tips off the week of October 18th.