The Phoenix Suns Did Not Arrive Here By Accident

On those days of the NBA Draft Lottery, all the losses Phoenix had piled up throughout the season turned from painful memories to useful bargaining chips. Because as torturesome as it had been to watch their beloved Suns fall so often, the lottery signified the possibility of change, imparted hope for more.

Luckily, a few of those fateful bounces went Phoenix’s way, and several years later, they have cashed their lottery tickets in for the ultimate prize: a trip to the NBA Finals (though a championship would obviously be the ultimate prize, one must come before the other.) After years of suffering, fans of the purple and orange can look ahead to their team playing on the sport’s biggest stage, not simply hope Mark Tatum read their name as late into the Lottery show as possible.

But clearly much more than luck went into crafting the roster that delivered Phoenix their first Finals berth in nearly 28 years. It took tact, purposeful decision-making, and most importantly, performance from the players that the Suns front office placed so much trust in. But how did it all come together? Regardless of Phoenix’s previous lottery frequency or injuries to their playoff opponents, it was certainly not by mere chance, and certainly not by accident.

At the core of this Finals-bound Suns team, we find some of the fruits of the Suns’ losing labor– namely Devin Booker, Deandre Ayton, Mikal Bridges, and Cam Johnson. While Booker and Bridges were gems found in the middle of the first round, Ayton was the golden goose of the 2018 class, and the Suns’ prize for sporting a league-worst 21-61 record the season prior. With the success of Trae Young and Luka Doncic, two top prospects that were taken after Ayton in the draft, Phoenix’s selection of the Arizona product has taken significant scrutiny over the years. But during this playoff run, Ayton has truly proven his mettle, a development that makes those many years in the doldrums a little less dreadful.

With Booker and another talented ball-handler to be discussed later filling out the backcourt, a dominant interior force is essential for the Suns to fulfill their championship aspirations. Ayton has been exactly that these playoffs, using his boundless size and strength to provide efficient scoring, rebounding, and stifling paint defense. And while the Suns have surely missed on a few of their top draft picks, (looking at you, Josh Jackson and Dragan Bender) without their years on the league’s bottom rung, many of the pieces that have positioned them in basketball’s quintessential series would be absent. 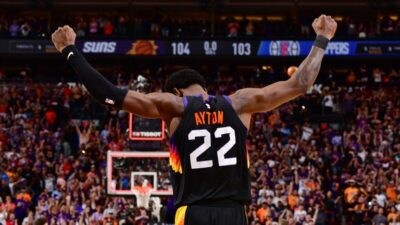 But the young Suns core described above has been in place for years. And while it has achieved some great feats on its own, like going 8-0 in the NBA Bubble last summer, they were nowhere near capable of reaching the heights at which we see the team today.

Yet last offseason, many would have been content with the progress that group had made throughout their time together. Content enough that they would allow the roster to stand pat, marching into the next season with renewed yet contained optimism.

But the Suns Front Office, namely GM James Jones, saw the bubble run as a harbinger of the team’s potential. And in the interest of not letting that potential slip away, a mistake that is so common in the NBA, he aggressively moved to acquire what he believed to be the final building block: a veteran leader to bring the most out of each and every player on the roster.

There is no better man to fill that role than Chris Paul.

Luckily, the fabled “Point God” was on the market, and Phoenix forked over four players and a first round pick in exchange for his services. General expectations for Phoenix entering the season varied from fringe playoff contenders to around the 5th seed, but hardly anyone expected an improvement this drastic.

Such is the effect Paul consistently has when he joins a franchise, everywhere from New Orleans to Oklahoma City. With less defensive attention, Booker flourished more in off-ball situations and even increased his effectiveness with the rock. Ayton received easier and more regular post opportunities, increasing both his confidence and production. And with one of the greatest passers of all time setting them up, Phoenix’s shooting-focused offensive players saw far more success (Bridges, Johnson, Dario Saric, and even Jae Crowder, another crucial veteran added in the offseason.) Paul’s own scoring prowess, particularly from mid-range, as well as his defense at the point of the opposing attack have also been important cogs in the Suns juggernaut. 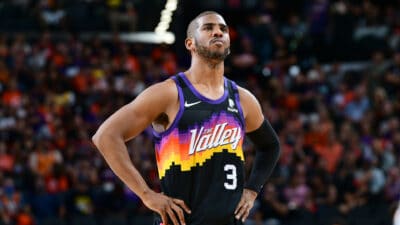 Another aspect of the Suns’ prosperity that may not receive the attention it deserves is the expert scheming of Head Coach Monty Williams. A former player with a sharp eye for the game, Williams has been especially pivotal in integrating Paul so quickly and effectively. The Suns play an unselfish brand of basketball, and arrive to each game prepared and focused. All of these vital factors can be attributed to Williams, who arrived when the Suns were toiling at the bottom of the NBA and has delivered them to the game’s highest stage.

One of the most frequent complaints toward Phoenix’s run to the Finals has been the ill-fated health of their playoff opponents. And while it is true that their success has been aided by injuries to key opponents, this is the case for many championship runs in NBA history, and should not be used to discredit the fantastic team the Suns have assembled. Phoenix can only be tasked with defeating the players across from them, and that is a feat they have shown no difficulty in accomplishing.

It takes talent, poise, skill, and yes, a bit of luck to reach the hallowed halls of the NBA Finals. The Phoenix Suns have their healthy share of all four, and it has resulted in the rejuvenation of a franchise that once appeared hopeless. But the Suns organization has done all of the right things to recover from that period of struggle. They have capitalized on their draft opportunities, infused the roster with experienced talent, and aggressively bet on the potential of their own players. All of those carefully calculated, purposeful moves have put them exactly where they want to be: back in the NBA Finals, with a chance to do something the organization has never done before: hang a championship banner.