There are few fiercer on-court rivalries in the sport of basketball than that which exists between LeBron James and the Golden State Warriors. From the greatest comeback in NBA Finals history to years of lopsided defeats, their history is one written by bristling acrimony on the sport’s biggest stage.

And yet, when it came time for Draymond Green, one of the most integral and agitating members of that Warriors group, to celebrate his wedding day, James arrived with a suit and a smile. Boston Celtics star Jayson Tatum was also in attendance, a player whom the Warriors had just finished dispatching in the Finals. After the ceremony, The King posed for a picture with Green and fellow Warrior Steph Curry, a photo in which they each held up four fingers, signifying the amount of championships they had accrued. It was an unmistakable sign of brotherhood, especially when considering that over half of the rings in question had been won against someone else in the photo. 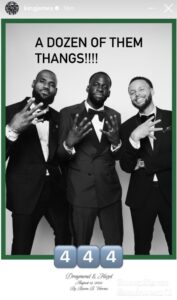 James and Green are more than competitors– they are friends. Men whose personal relationships are not bound by their professional obligations. For many basketball fans, it is strange, or even upsetting to see such camaraderie among players that appear to be bitter enemies. But the modern NBA is a fellowship. And accepting that fact is a part of realizing that the league’s players are nothing more than regular individuals, who, like the rest of us, have dimensions of their lives that are separate from where they work.

Much of the disapproval toward NBA players’ off-court friendships stems from an older, more abrasive attitude, which places basketball success as the sole objective in their lives. Many fans will cite the hatred that permeated in past rivalries, like Michael Jordan and the Bad Boys Pistons, and wonder why today’s players seem to lack that visceral edge. But this change is not reflective of a shift toward nonchalance. Rather, it demonstrates the continued rise of player empowerment and agency, and helps expand our understanding of the individuals we root so passionately for.

In 2018, when the DeMar DeRozan-Kawhi Leonard swap took place, it broke up one of the most tight-knit friendships the NBA has ever known. By all accounts, DeRozan and fellow Toronto Raptor Kyle Lowry were as close as close could be. They were the faces of Toronto basketball, and their clear companionship only further endeared them to Raptors fans and basketball fans alike.

Once Lowry and DeRozan no longer shared the court together, their relationship may have been hindered, but it was not severed. The next season, Lowry was seen continuing to perform the handshake he and DeRozan had created together, but with the air as his partner instead of his beloved friend.

The former Raptors’ bond has endured as one of the strongest in the league, regardless of what colors they wear. 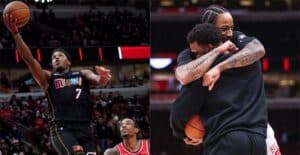 Such a relationship is not contingent upon having been teammates. Sure, it is easier for players to cultivate a relationship with the people they see and go to battle with on a daily basis. But when the buzzer sounds, NBA players all work for the same umbrella organization, and occupy a unique cultural and financial niche which they can share only with each other. How could camaraderie not materialize?

If Lowry and DeRozan were seen working out together during the offseason, there would be little objection. There is no reason other players who suit up for opposing clubs should not be afforded the same protection. It is completely possible for relationships between players to transcend basketball, while simultaneously not affecting their tenacity on the court. Never, in the vast history of the NBA, has a player not tried his hardest because one of his guys is on the other team.

Not every player in the league actively participates in the fraternity. Giannis Antetokounmpo, old-school both in his bruising style of play and in his solidarity, said of his fellow players “I don’t want to be buddies with them. If we do this and then drink a coffee with them, can I go in the court and use my elbow against them? Can I block or dunk on them? I can’t ‘cause I am authentic. If I love someone, I love him also on the court.”

Many opponents of community amongst NBA players have praised Antetokounmpo for this stance, and implored others to follow suit. But in truth, the choices Giannis makes for himself are in line with the fundamental principle that underlies player friendships: that the individuals who happen to play NBA basketball are three-dimensional. And while their career success may appear to be mutually exclusive, their personal fulfillment is not.

Antetokounmpo’s decision is founded upon his understanding of himself. He feels making private peace with his adversaries would interfere with their public war, and thus he avoids it. But every player is different. They are unique people with unique circumstances, capable of making their own decisions. And while basketball is the most important thing in many of their lives, there is not a single one for whom basketball is the only thing. 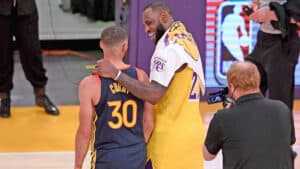 When James poses for a photo alongside Green and Curry, he does not consider their many blows exchanged on the hardwood. He thinks of them as contemporaries. For a professional athlete, such a thing is very difficult to find. There are very few others in the world who can relate to their day-to-day experiences. The obvious exception is, of course, other athletes, or better yet, other basketball players.

These relationships do not soil the league’s competitiveness. They do not make the game any less authentic. They serve only to foster a more close-knit community of players, one that can clash when the clock is running and shake hands once the whistle blows. And while their playing days will inevitably come to an end, the bonds they form have a chance to last forever.