EuroBasket 2022 Guide: Everything You Need To Know

With roughly a month to go before the NBA season tips off, many fans have enjoyed watching their favorite foreign stars compete against one another under different banners during this year’s EuroBasket competition. The highlights and box scores are everywhere, but plenty of questions still remain regarding the competition and how to watch it. Today, we will answer those questions, and get you set to watch as nations compete for the title of Europe’s best team. When does EuroBasket take place?

EuroBasket runs from September 1st to September 18th, when the championship game is played. As of now, the competition has been narrowed to the Semi-Finals. Here are the matchups and times for the remaining schedule:

How can I watch EuroBasket?

All EuroBasket action will air live on ESPN. Additionally, here is the link to the FIBA website, which lays out the schedule and contains a link to the broadcast: 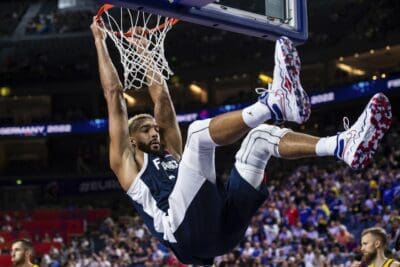 What NBA players are still competing?

Below are the NBA players on the rosters of the teams still alive for the EuroBasket title: 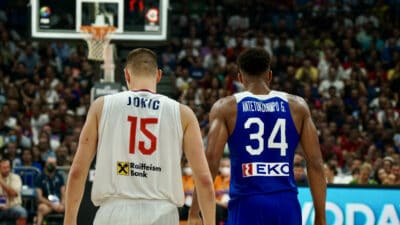 What notable NBA Players have been eliminated in previous rounds?

The quarterfinals round saw two of the tournament’s best players bow out. Greece, led by Giannis Antetokounmpo, as well as his brother Thanasis Antetokounmpo, both of the Milwaukee Bucks, fell to Germany 107-96. Thanks to some red-hot three-point shooting from the Germans, which included a stretch of 15/23 from beyond the arc, not even the former NBA Finals MVP could save Greece. Giannis was also ejected after receiving his second unsportsmanlike foul with 4:56 remaining, though Greece trailed by 14 points. Here is the video of the play Giannis was tossed for.

Slovenia, which featured Luka Doncic of the Dallas Mavericks and Goran Dragic of the Chicago Bulls, was also eliminated in the Quarterfinals, losing to Poland 90-87. Slovenia was the champion of the most recent EuroBasket in 2017, and entered this year’s competition as one of the premier favorites. Surprisingly, Doncic was not Slovenia’s leading scorer in their game against the Poles– that distinction went to Vlatko Cancar, who currently plays for the Denver Nuggets. But in the game’s dying moments, it was not Doncic nor Cancar with the ball in their hands. Klemen Prepelič, a shooting guard who currently plays in the EuroLeague, missed a potential game-tying three-pointer with two seconds remaining, sending the defending champs home with a sour taste in their mouths.

If a team with no NBA players defeating a team with Luka Doncic on it does not demonstrate the unique ways of international basketball, I am not sure what will.

Back-to-back reigning MVP Nikola Jokic of the Denver Nuggets was eliminated in the Knockout stage, the round before the Quarterfinals. Leading his native Serbia, Jokic and his fellow countrymen fell to Italy 94-86. Despite 32 points from Jokic, Italy was able to narrowly advance before losing to France in Overtime in the Quarterfinals. It is also worth noting that Italy was playing without new Boston Celtics pickup Danilo Gallinari, who suffered a torn ACL earlier in the competition, and will likely miss the entire 2022-23 NBA season as a result.

What players have been the major difference-makers thus far?

Germany’s Schröder and France’s Gobert have likely been the competition’s most valuable players to this point. As Schröder auditions for another shot in the NBA, he has been the engine behind Germany’s offense, and led the team with 26 points and 8 assists in their semi-final win.

Gobert has brought his stifling defense with him overseas, and also poured in 19 points and 14 rebounds to advance France to the final group of four. Will their performance carry over to the championship rounds? Only time will tell.

Each team and each player, regardless of professional affiliation, will have their hearts set on bringing home a Gold Medal for their country. It is a great honor, and a matter of personal and national pride for every player competing. Be sure to tune in for the final few games of EuroBasket 2022!