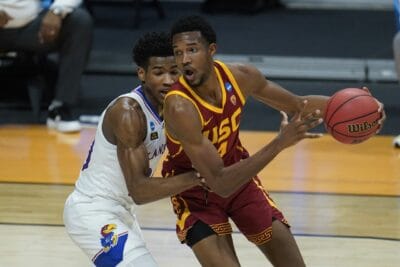 There is a lot to like about how Mobley performs on the more glamorous end of the floor, but certainly the most prominent is just how differently he performs than most bigs on both the collegiate and professional levels. The best way to describe Mobley’s game offensively is that he plays like a supersized guard. He handles the ball routinely and adeptly, (often from the top of the key) and takes a healthy helping of mid-range jump shots. He is a comfortable and capable shooter from beyond the arc, and can create his own shot from almost anywhere on the floor. Navigating through traffic is no issue, and neither is hitting tough looks. His play carries a lethal fluidity.

But along with those guard-like skills comes another common pitfall of the game’s more ball-dominant players: turnovers. Mobley tends to force passes into difficult spots, and appears to occasionally struggle with fully seeing the floor around him. This is a very solvable issue, but one he will certainly have to work on with NBA defenders now constantly swarming around.

In terms of more traditional Center play, Mobley is a creative finisher around the rim. His length and athleticism allow him to convert extremely difficult shots at the basket, and he has a few solid mid-post finishes (floaters, hooks) in his arsenal. He is not a back-to-the-basket big, and while this is certainly not an issue, he could serve to play with a little more strength and power in the post. This could come when he adds more muscle to his wiry frame, and it would give him more reliable scoring options against smaller, quicker defenders. And for how skilled he is as a finisher, Mobley could look to attack the basket slightly more than he did in his lone season with the Trojans. While his mid-range jumper is both crisp and accurate, there were a couple of instances throughout my evaluation in which I felt he “settled” for it. Feeding the defense a routine dose of both poisons will be key for his evolution as a scorer.

With his unique and expansive array of offensive capabilities, I believe Mobley can develop into the perfect modern big man. His ability to handle the ball, initiate offense, and capitalize both inside and outside the paint will make him an asset to any offense, and one that could become a truly dominant force. Though his offensive repertoire is not perfect, with the tidying of a few minor issues, the sky is truly the limit. 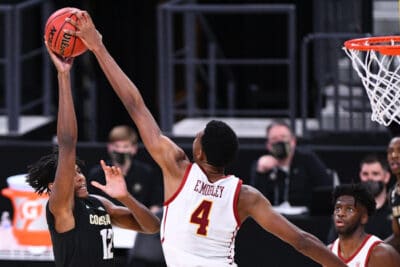 Each season we continue to observe the rising importance of an interior defensive anchor, and that is a role Evan Mobley can potentially fill. Though he was not asked to do too much as USC, (they seldom allowed him to be stranded on the perimeter) Mobley’s shot-blocking ability is a skill that will undoubtedly translate to the next level, giving his game another dimension that is essential for an elite big.

The primary reason Mobley is such an elite shot-blocker is his length. With a 7’4” wingspan, he can erase opposing looks from any angle and is skilled at doing so without fouling. This is his main calling card on the defensive end, and was one of the main reasons USC’s defense became their defining aspect late in the season.

Mobley was frequently tasked with guarding the pick and roll, and while he showed some vulnerability against quicker guards, he was mostly successful. There were several times where his aforementioned shot-blocking bailed him out of a bad rotation, which is something he will need to clean up. Mobley is certainly not poor rotationally, but his occasional whiffs have prevented him from being great just yet. But again, his shot-blocking has prevented it from mattering too severely.

As a help defender and rebounder, Mobley truly alters the game in a way that will make NBA executives salivate. He is always aware of opposing drive attempts, and while we have established that he does not always position himself quickly enough, when he does, his contests are fantastic. When those adversary attempts clank off the rim, as many Mobley affected by Mobley do, he is aggressive and active on the glass, with his motor and wingspan combining to swallow up almost every opposing miss.

Though his defensive responsibilities were certainly uncomplicated in college, Mobley fulfilled them as robustly as he could. With his phenomenal shot-blocking and great physical tools, Mobley has everything necessary to become a two-way game wrecker at the next level.

In my time watching Evan Mobley, I have grown a special appreciation for the poise and smoothness he demonstrates in his game and an optimism for what he can become and accomplish. He fits like a glove in the modern NBA, with boundless potential to improve even further in the right situation. Whichever team drafts him will receive not only an impact player, but one that can impose that impact in a variety of important ways.