As yet another year of NBA coaching vacancies are filled, a refrain that has become hauntingly familiar in the sport quiets down once again: “Who is going to hire Becky Hammon?”

Hammon, 44, is a female assistant coach for the San Antonio Spurs and has filled that role since 2014. She is just the second female assistant coach in NBA history– there has never been a female Head Coach in any of America’s major professional sports. Operating under Gregg Popovich, a man who is widely considered to be one of the greatest coaches the sport has ever seen, she has developed into perhaps the most highly regarded assistant in the league. And each year, when a fresh batch of organizations show their underachieving Head Coaches the door, Hammon’s name is one of the first that is optimistically brought up as a replacement. But thus far, none of those openings have borne fruit. Why?

A lack of basketball experience?

Hammon played in the WNBA for nearly fifteen years, making six All-Star appearances and being selected to the All-WNBA First Team twice.

A lack of coaching success?

A lack of endorsement?

Becky Hammon lacks none of the criteria necessary to become an NBA Head Coach. And yet, she remains in a secondary role. Is asking “why?” truly necessary? 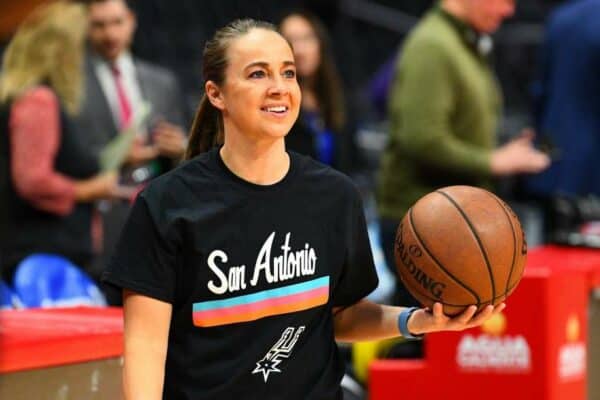 Now, this is not to accuse the NBA of outright sexism. Rather, that the weight of making history is extremely heavy, and it is often easier for an organization to hire another candidate, rather than take a “risk” on Hammon. In reality, Hammon is likely one of the safest choices there is, but because of the lack of precedent behind female coaching, her name has yet to be called.

This is especially egregious given how extensive Popovich’s coaching tree has grown. The NBA is a relationship-based business, and because of Popovich’s unrivaled reputation, many Spurs assistants have found both opportunity and success as Head Coaches. Mike Budenholzer, Mike D’Antoni, Taylor Jenkins, Quin Snyder, and others are all former Popovich disciples who got their chance to be Head Coaches elsewhere. Yet Hammon has not been privy to the same level of unwritten trust.

Recently, Hammon was named a finalist for the Head Coaching position with the Portland Trailblazers. Despite being consistently elite offensively, Portland has repeatedly hit playoff roadblocks thanks to their struggles on the defensive end. This brought them to fire Head Coach Terry Stotts and look for a new candidate that could strike a more harmonious balance between the two sides of the ball.

Enter Hammon, who has helped lead the Spurs to an average defensive ranking of 9th (out of 30 teams) since her first season working with the team. While this has also been the result of stellar talent on the team, the very role of coaching is to reveal that talent and place it in the best position to succeed. Hammon never fails to do so.

But in the end, Hammon lost out to Chauncy Billups, an assistant coach for the Los Angeles Clippers and former NBA Finals MVP. Billups has previously improved defenses too, but to see Hammon not be selected to solve an issue she has such clear experience with is yet another painful dagger in her Head Coaching saga.

Shortly after the news broke that she had not been given the Portland job, Hammon was interviewed by CNBC  regarding her pursuit of making NBA history. Her comments have come to define not just that particular race, but her experience with Head Coaching as a whole, and the attitude both from and toward female coaches in sports.

“I knew I was second. I knew who they [Portland] wanted,” Hammon said. “And I’m OK with that, because every race I’ve gotten into my entire life, I’ve been behind, and I’m OK with that. And that’s just how it is. But at the same time, I’m not ignorant to what I’m going up against.”

What Hammon is “going up against” is a lifetime of standard. An entire history of coaches who have looked nothing like her. Nonetheless, she refuses to allow her potential status as a paradigm-shifter to be the reason she earns a Head Coaching job.

According to the teams that have rejected her services, Hammon has yet to check all of those “right” boxes. Whether or not those teams made the correct decision is a mystery we will never receive a definitive answer to.

But what we can be certain about, through her history, success, terrific basketball mind, and ringing endorsements is that Becky Hammon can coach NBA basketball. Period. And while her strife to this point may have been unwarranted, it is an obstacle that will only make her eventual triumph even sweeter.

Because when Hammon finally gets her shot, she will not miss.

This article was awarded Runner-Up in “Write the World”‘s Sportswriting contest! Read the judging here.