When Whole, the Nets are Nearly Unbeatable– but that may Never Come to Pass

In sports, one of the difficult tragedies to observe is that of wasted potential. A player losing what looked to be a promising career to injuries, or a solid team never having the pieces they need to put together a championship run. These occurrences are common– heartbreaking, but common.

Less common is the unfulfilled glory of a group that does have everything they need, every piece in place, and yet those pieces can never mesh together properly. The most frequent disease behind the downfall of such teams is a terminal lack of chemistry, a dearth of synergy between the playstyles of their biggest stars.

Nearly unprecedented is the case of the Brooklyn Nets. All the talent you could ever dream of is present. So is an underlying rhythm between their three-headed dragon of Kevin Durant, Kyrie Irving, and James Harden. But to this point, nearly a year after the acquisition of Harden, the ridiculously talented roster that Brooklyn has assembled is still unproven. Not because of any grand failure, but because their dynamic trio has merely taken turns forming exceptional duos.

Durant, Harden, and Irving have played just 13 games together since they joined forces early last season. 5 of those came during their first round playoff series against the Boston Celtics, a thrashing in which the stars’ lack of familiarity seemed like more of a talking point than something that would actually hold them back. The Nets had begun to prove wrong the assumption of their doubters, those who believed they would be hindered by their supreme lack of shared time on the court. With this much talent, Brooklyn boldly proclaimed, not much else matters.

The snag arrives when that talent fails to take the court, a struggle that, unlike playing with one another, the Nets’ big three is highly familiar with. After dispatching Boston, Brooklyn set their sights on the more formidable Milwaukee Bucks. But in the opening minutes of Game 1, Harden went down with a hamstring injury. The Nets opened up a 2-0 lead in his absence, but as one superstar prepared to return, another was extinguished. Irving exited Game 4 with an ankle injury, a night on which the Bucks tied the series at 2 games each. With Irving out and Harden hobbled, the Nets fell painfully short of a Game 7 victory, despite several dazzling performances from Durant. Regardless of how much starpower the Nets possessed, they were eliminated, and the Bucks moved on. When the lights were brightest, the Brooklyn buzzsaw failed, primarily because it never got the chance to operate at peak capacity.

Now, with the next regular season set to begin, another absence stands in the way of the Nets dominance that once seemed inevitable. Irving refuses to cooperate with New York City’s COVID-19 vaccination mandate, sidelining him for home games. The Nets took that restriction a step further, barring Irving from playing in away games or practicing with the team until he decides to receive the vaccine and be with the group full-time. Any forecast of how long this stalemate will last is a guess at best, and a misguided attempt to understand the sport’s most volatile, unpredictable mind at worst. 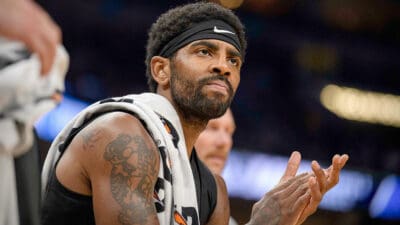 When the Nets tip off against the Bucks this evening, there will be many things that look much different than their last matchup. The game will take place not in Brooklyn, but in Milwaukee, as the Bucks raise the championship banner that their victory over the Nets helped them achieve. Each roster has been tinkered with, certain role players shipped away and fresh faces in their place. But one factor remains unquestionably similar: the Nets will take the court at a level of strength short of what they are truly capable of.

I have written extensively in the past about how unique the Nets are in the halls of NBA history (here and here.) Few teams have ever been so haphazardly constructed yet undeniably elite. Originally, the Nets’ formula threw depth to the wind, banking entirely on the shot-creating and shot-making ability of their leaders. When those leaders were not fully available, the equation failed. This offseason, General Manager Sean Marks made a concerted effort to replenish the team’s bench with veterans, players who may not see constant action, but were prepared to step up whenever necessary. This effort was sparked not by the belief that starpower alone would not be enough, but by knowledge of how fleeting that starpower is.

Irving’s current absence is particularly troubling because of the uncertain nature surrounding when or if it will end. It is not a typical injury that can be healed by time alone– a change must occur, one that the Nets have the luxury of waiting out but not one they have the luxury of foregoing. With Durant and Harden leading the way, the Nets are still one of basketball’s best teams, a true title contender. But with Irving in the fold they are virtually unstoppable, bona fide championship favorites. And those heights they could reach are what makes Brooklyn’s failure to assemble so disheartening. What would amount to one of the most offensively talented and raucously entertaining teams in the history of basketball has never truly been, and now threatens to never be.

We all know it. Harden and Durant know it. But rather than embellish the obvious disappointment that surrounds the incomplete nature of their once-coronated team, they are content to take what is offered. To move forward.

“We gotta focus on the guys in the locker room that are here,” Harden said, shooing away a question about Irving.

“It’s on me to just focus on me and do my job,” Durant said, taking a similar, interior angle.

They do not have much of a choice. How good the Nets can be with everyone present and accounted for has never been in question. What is now becoming increasingly uncertain is whether there will ever be a sustained period of wholeness, one long enough for the team to reach the lofty heights they are capable of. We can only hope that in the future, when we look back on this wonderfully wild Nets team, they are not defined by their inability to fully convene.

One thing is definite: the Nets will tip-off tonight without the entirety of their superstar trio intact. That has become a familiar refrain. Only time will tell if it becomes an eternal one.