When comparing the stature of basketball’s most elite players, the most common factor used to gauge the best of the best is scoring. Putting the ball in the hoop is basketball’s fundamental pursuit, and it makes sense that the players that do that the best are considered valuable. But once you look past pure point totals and blind production, you begin to see that the most adept scorers are the ones that can produce a solid output without an exorbitant amount of shots. The more efficiently a player can score, the more they will help their team’s offense, and the more they will contribute to winning basketball.

Many fans often turn to Field Goal% to measure a player’s efficiency, and while this is by far the easiest way of doing so, the age-old stat comes with many flaws. Firstly, FG% fails to factor in the added difficulty and value of 3-pointers, an issue that is becoming more and more problematic in this perimeter-centric era. Secondly, it does not consider a player’s effectiveness at the Free Throw Line, a pitfall that often scorns the sport’s craftiest players.

True Shooting Percentage, abbreviated TS%, is the stat that I believe most fully encapsulates all facets of a player’s scoring and produces a number that accurately reflects their efficiency. While it is currently considered an advanced stat, I believe TS% should be used as a standard basketball statistic, and would help adapt how we measure scoring ability in this ever-changing sport.

How TS% is Calculated

Unlike regular FG%, which carries a fairly basic calculation process, TS% requires a slightly more advanced method to determine. Here’s the raw formula (though bear with me, it is quite math-intensive):

Without delving too deeply into what that all means from an arithmetic perspective, we essentially learn that the three basic numbers TS% takes into account are points, field goal attempts, and free throw attempts. At first, you may wonder how this factors in three-point shooting, or otherwise measures a player’s efficiency outside of pure points. After all, it fails to touch on made field goals or made free throws.

However, by crossing a player’s total scoring output with how many attempts they took from the field and the charity stripe, the TS% formula actually can factor in the value of those individual shots (i.e. how many were threes) as well as how many went in. Though it is a bit of a complicated process, all the groan-inducing calculation combines to churn out a number that is far more telling than simply dividing a player’s amount of made baskets by their amount of attempts.

Applicable Across Eras and Playstyles 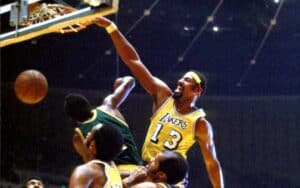 One of the most common obstacles faced by basketball fans when attempting to compare players from different times is the sheer number of differences that one decade of play can have compared to another. Most prominent among these roadblocks is the rapid pace of the 1960s, a factor that exorbitantly inflated the scoring output of some of its top players (a certain 100-point scoring big man comes to mind.) But TS%, along with the use of its companion stat, real True Shooting% (rTS%) can provide us a measure of efficiency that transcends both period of play and the style of the player.

rTS% compares a given player’s TS% to the league-average for that selected year. So, for instance, in 2016, Steph Curry had a TS% of roughly 67. That same year, the NBA as a whole had an approximate TS% of 54. So in his unanimous MVP season, Curry had a rTS% of 13, since his TS% was 13 percentage points above the “average player.”

This is useful in multiple ways, both for calculating how much a player’s efficiency helps their team, and in how much someone’s shooting woes may be hindering their squad. For example, as much as I love Russell Westbrook, shooting efficiency is perhaps his weakest area. In 2018, Westbrook’s rTS% was about -3.2, meaning he actually shot the ball worse than the average NBA player that season. Of course, all stats must come with proper context, and I believe Westbrook’s excellent volume, as well as his offensive load, render him a solid scorer nonetheless, but it is crucial to consider relative efficiency when comparing the best of the best.

Like all measures of efficiency, TS% does favor players that take close-to-the-basket, high-percentage shots, like big men. Rudy Gobert, Mitchell Robinson, Artis Gilmore, and Tyson Chandler occupy 7 of the top 9 spots for the highest TS% in a single season. But by factoring in perimeter ability and Free Throw shooting, TS% does a far better job of accounting for the more high-risk playstyle of guards than FG% or Effective Field Goal% (EFG%.) There is no singular statistic that can adequately function across every nuance the vast game of basketball has to offer, but TS% comes remarkably close.

As it stands, TS% is currently relegated to the “Advanced” section of most basketball statistics trackers, and typically plays second-fiddle to FG% in terms of general fan usage. However, increasing the rate at which TS% is utilized would likely have significant benefits for the basketball community. Elite efficiency is one of the primary factors that separates average NBA players from superstars, and no one statistic measures it better than TS%. The more it is popularized, the more warranted credit great shooters will get for their impact on their teams, and the easier debates over which of two players is superior will become.

Of course, every stat requires context and skepticism. Nothing can be taken simply at face value. One potential issue with TS% is that it can sometimes be inflated for individual games, even above the “perfect” mark of 100%. This is not to say it can never be used to measure single-game performances, but it is best suited for application over stretches or seasons.

Basketball is a sport with much depth and complexity. There are so many individual facets around which one can judge a team or player, all with their own importance. But efficiency is one of the foundational aspects of the game– after all, it is a “make or miss” league. Though it is far from perfect, I believe TS% does a better job of quantifying this important value than any other metric. In a constantly evolving sport, the way we watch must adapt with similar rapidity, and TS% is the most modern shooting stat we currently have available. By using it to its fullest effectiveness, we can better understand what makes winning basketball, and ensure the game’s most efficient players get the praise they deserve.

All stats are courtesy of Basketball Reference.