DeMar DeRozan and the Death of the Mid-Range Jumpshot

On February 28, 2017, the NBA world was beset by a statistic that perfectly encapsulated the league’s recent radical shift in style. It demonstrated one team’s thirst for relentless innovation, one player’s unflinching commitment to the ways of old, and how the tension between the two threatened to break basketball as we knew it.

DeMar Derozan, Shooting Guard for the Toronto Raptors, had taken more mid-range jump shots on the season (571) than the entire Houston Rockets team (468.) That mind-boggling fact held true for the rest of the campaign, with DeRozan finishing at roughly 747 attempts in 74 games, while the Rockets took just 579 over the course of their 82. In terms of percentages, about 48% of DeRozan’s total Field Goal attempts came from mid-range, while the Rockets relegated it to the depths of their gameplan, shooting it just 0.08% of the time.

This ridiculous contrast is stunning, but should it be surprising? Since hiring Mike D’Antoni (former architect of the “7 Seconds or Less” Phoenix Suns) in 2016, Houston had committed to the NBA’s three-point revolution more heavily than anyone, even its original inspiration, the Golden State Warriors. DeRozan had made his NBA living by playing a slow, methodical brand of basketball, and was not willing to change it simply to fit in with the current trend. But since that day, more and more teams have gone the way of the Rockets, making players like DeRozan more and more uncommon.

And as violent as the league’s assault on the mid-range jumper has been, players like DeRozan have defended it until the bitter end.

Since its inception, the sport of basketball has been prone to different waves and fads. The rigid defense of the 1990s. The isolation craze of the 2000s. And most recently, the perimeter explosion of the 2010s. While many have dismissed the increased prevalence of three-pointers as merely as just that, a fad, it has the potential to stick around for much longer than your average league trend.

As analytics have taken more of a stranglehold on the NBA, basketball has been rapidly honed to perhaps its most efficient form. Threes are the most valuable shot on the floor, and attempts at the rim are the easiest. It only makes sense that teams would mercilessly hammer these two areas. But increasing the frequency of these coveted looks results in the phasing out of some of the previous era’s greatest hallmarks. Among them: the mid-range jumpshot.

At first, just how uncommon the mid-range has become is easy to miss. Your Dad may occasionally complain that no one plays the game the right way anymore, but without hard numbers, medium jumpers are out of sight, out of mind. 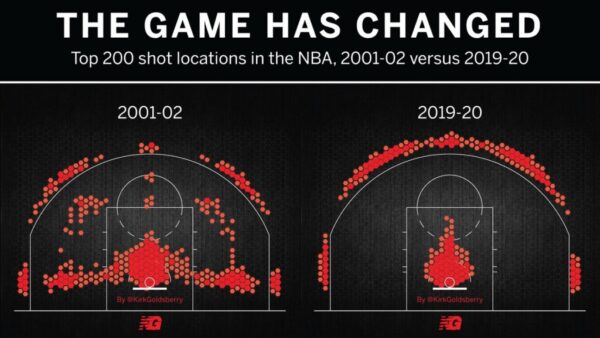 Based on this chart, it is alarmingly clear that mid-range looks have been siphoned out of the game almost completely, and their attempts extended to beyond the arc or shortened to the basket. But looking at the progression from the early 2000s onward tells an even more startling tale.

As you can see, the assasination of the mid-range jumper has been more of a slow poisoning than the violent bullet you may know it as. The frequency of the shot has decreased linearly since the mid 2000s, along with the steady increase in the popularity of the three-pointer. It is truly difficult to fathom that a shot that used to encompass over half of all total attempts is now an afterthought in most schemes. And yet, mid-range regularity has only decreased by 0.2% over the course of the last two seasons. Why?

Because a certain subset of the NBA player base still values the bygone shot. And because in some ways, playing to one’s unpopular strengths is better than succumbing to one’s popular weaknesses. 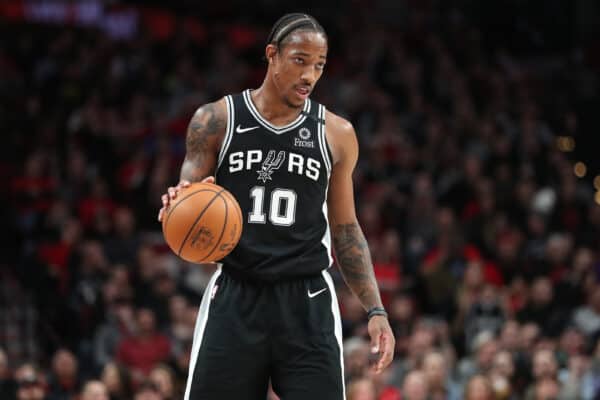 In the grand NBA fairytale, DeRozan will be unjustly remembered in one of two ways: as an integral part of the Toronto Raptors teams that could never supplant LeBron James’s Eastern Conference throne, or as the soul that very team needed to sell in order to accomplish the ultimate goal.

Neither of these identities do justice to what DeRozan did for the Raptors franchise, nor do they recognize his deceptively solid stint in San Antonio, attempting to fill the gargantuan shoes left by Kawhi Leonard. But during his time in both Raptors Red and Spurs Black, DeRozan has been a champion of basketball’s most neglected look.

Here are some numbers regarding DeRozan’s mid-range prevalence over the past few seasons:

There are few NBA players who have remained as loyal to the mid-range jumper as DeRozan, who also takes a staggeringly low amount of threes. But nonetheless, during his time in San Antonio, he has continued to blossom into one of the league’s most quality players, even after being cast out of the NBA limelight. Each and every year the basketball community anticipates a steep dropoff from the Spurs, and still they continue to persevere. DeRozan is a crucial piece in that surprising competitiveness, that maybe should not be so surprising any longer.

Though not a spectacularly athletic player, DeRozan’s mid-range shot is the primary tool in an arsenal that still makes him a winning player. This season he is averaging roughly 21 PPG on an efficient +2 rTS% (for more on True Shooting%, read here.) And despite logging a substantial amount of minutes at Power Forward this season, (a relatively new position) DeRozan is still one of the league’s most unique scorers, and arguably deserved an All-Star bid.

While the elimination efforts against the mid-range jumper have been torrential, there has actually been a slight uptick in its utilization by stars this season. So far in 2021, 8 players are attempting over 5 mid-range shots per game, up from 5 last season. Of those 8, 6 were selected to the All-Star game, with the other 2 being former All-Stars. And of the top 15 players in mid-range FGA, all 15 have made an All-Star appearance at some point in their careers (11 in 2021.) Clearly the NBA’s most elite players still understand the value of this ancient look.

Now, pointing out these successes does not take away from the efficacy of the recent three-point movement. But it does demonstrate that despite its declining popularity, especially among the sport’s mad scientists, the mid-range jumpshot is still an effective means of racking up points. Consistent, winning basketball still requires careful use of all the tools at a team’s disposal, and it would be foolish not to capitalize on defenses’ newfound focus on protecting the paint and the perimeter. Despite its perceived inefficiency, the shot still has plenty to offer.

From the beginning of his career with the Raptors, to the moment he was used as the main chip in his team’s ultimate gamble, to his continued prosperity in San Antonio, DeMar DeRozan has been committed to playing his style of basketball. While his game’s most prominent component may be from an era of old, he still uses it to its fullest potential, making plenty of opponents dour along the way. The mid-range jumper and DeRozan were born for one another– both frequently doubted, but consistently incredible.

And despite his colleagues’ best attempts to kill his favorite shot, DeRozan refuses to let it die.