Illinois is the Best Basketball Team in the Country– But Does It Matter?

Ohio State’s E.J. Liddell knows the stature of his opponent, and today, he’s prepared his best shot to knock them out. With 3 minutes and 48 seconds to play, he nails a tough three-point jumper to extend OSU’s lead to 4 points. In a season where both teams have been forced to battle their way through one of the toughest Big 10’s in recent memory, the Buckeyes look positioned to land the final blow in the regular season’s finale.

But the Illinois Fighting Illini are far from done. After starting the season 5-3, then 9-5, they have won 12 of their last 13 to put themselves in prime position for a #1 seed in the NCAA Tournament. Brad Underwood’s team will not let that opportunity sip away.

After a series of scrappy defensive plays, something Illinois produces in spades, a hard drive to the rim from National Player of the Year candidate Ayo Dosunmu gets him to the line. He goes 1 of 2, but cuts the lead to a single possession. After forcing a bad look on the other end, the Illini swing the ball to sharpshooter Da’Monte Williams for a triple to knot the game at 68. Another missed OSU three, another defensive rebound from All-American Kofi Cockburn, and a tough And-1 layup from Dosunmu gives Illinois a three-point lead. It is also the fifth and final foul on Ohio State’s defensive stalwart Justice Sueing. The final uppercut.

Only one possession now separates the conference powerhouses, but after an 8-0 run from the Illini, all watching, including the Buckeyes, know the contest is decided.

That lethal precision is what makes Illinois so dangerous going into a March Madness like no other. Over the course of the season they have found their groove, coming out on top of a Big 10 that also features the aforementioned Ohio State, fellow 1 seed Michigan, 2 seed Iowa, and other dancers Purdue, Wisconsin, Maryland, Rutgers, and Michigan State. They slot in as the tournament’s third overall seed, but I believe they have a compelling case as the nation’s best team, and the most worthy challenger to the undefeated Gonzaga Bulldogs.

There is plenty to like about both Illinois’s individual players and their overall execution. First and foremost, they are one of the most efficient teams in the country, cashing in just under 50% of their Field Goals, good for the 7th best rate in the nation. The only two tournament teams that lead the Illini in that category are Gonzaga and Loyola Chicago, who both play in significantly weaker conferences. And while the three-pointer is their primary method of scoring, they are still top 25 in the nation in terms of nailing their triples at 37.6%.

But where Illinois truly shines is on the less glamorous end of the floor. Led by Donsunu and Cockburn, the Illini boast the second best opponent offensive rating in the country when accounting for strength of schedule. They are also top 5 in adjusted defensive efficiency. They possess almost no holes in their defensive front, with Donsunmu and fellow guard Trent Frazier constantly bothering guards on the perimeter and the massive, 7’1 Cockburn clogging up the paint. Freshman guard Andre Curbelo is also a plus defender, and Coach Underwood has installed a system that plays to the strengths of his most talented players.

Speaking of Dosunmu, Cockburn, and Curbelo, Illinois’s elite personnel is another factor in their potentially title-winning approach. We’ve discussed him extensively, but there is still plenty more to potentially be said about the effectiveness of Dosunmu, who would have a strong argument for the Wooden award if not for a certain Iowa big man. Donsunmu’s game is succinct and tactful, without a single weakness in any facet. He handles the ball well, shoots efficiently from all three levels, and distributes the ball spectacularly to the Illini’s other playmakers. While Illinois survived during the stretch of time he missed due to injury, they clearly missed Dosunmu in all aspects of the game, and especially in crunch time. 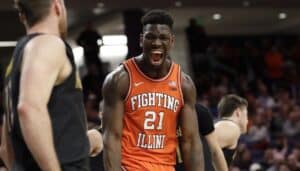 Cockburn is perhaps the NCAA’s most dominant physical presence, and his playstyle reflects it. He is relegated almost exclusively to the painted area, where he dwarfs opposing bigs on offense, protects the rim on defense, and swallows up boards on both ends. While Cockburn is the stereotypical back-to-the-basket big, employing virtually no ball-handling prowess or perimeter presence, he is still an invaluable piece to the Illini puzzle. Arguably Cockburn’s best performance of the season came against a far more skilled big, who also happens to be college basketball’s best player: Iowa’s Luka Garza. In Illinois’s matchup with the Hawkeyes in the semifinals of the Big 10 tournament, Cockburn physically dominated Garza for 26 points on 11/15 shooting, including 18 in the first half alone. Garza, on the other hand, shot 8/21 from the field– a mere 38.1%, and a far cry from his typical 54.7 FG%. This spectacular performance was a mere microcosm of Cockburn’s overall dominant season, and a level of play he must maintain for Illinois to reach their true potential.

Finally, guards Curbelo and Frazier complement the Illini’s superstar duo very well, wrapping up Illinois’s well-rounded core. Curbelo, a freshman, has become a fan-favorite late in the season thanks to his upside-down Nike headband and electrifying playstyle. Frazier is the pin that holds Illinois together on both offense and defense, as one of the team’s best three-point shooters and first team All Big 10 defender. Adam Miller, Williams, Jacob Grandison, and Giorgi Bezhanishvili complete the rotation, and each has fully committed to the high effort, high efficiency style of play Underwood has attempted to instill.

The mettle of Illinois has also been heavily tested, a trait that often comes in handy during the tournament. They have played the statistically toughest schedule of any team in colege basketball, and faced no shortage of elite compeitition on their way to the Big 10 title. This is primarily why I have tagged Illinois as Gonzaga’s largest competition. The Illini have repeatedly demonstrated their ability to handle (and in some cases demolish) high-level opponents, which would puts them in great position to take down the Zags in a potential national championship matchup.

While I do believe that the Illini are the nation’s best team, this is not to say they are without flaw. Most notable is their Free Throw shooting, where they hit just under 70% as a team. Additionally, Cockburn is abysmal from the line, a weakness that often forces him to the bench during clutch time. This has the potential to spell doom during the tournament, but Dosunmu, Frazier, and Curbelo shoot a combined 78.5% from the charity stripe, so if they can prevent opponents from targeting Cockburn, free throws will likely not be Illinois’s undoing.

But the reason Illinois’s excellence may not matter in the end is the same reason the tournament has earned its “madness” moniker– because nothing is certain. All the tape I have consumed and the data I have analyzed points toward the Illini as the class of college basketball, and it’s earned them the distinction of champion in my bracket. But there are plenty of factors that could easily make all that preparation fly out the window. A tiny school from the south side of Baltimore. A smiling, elderly team chaplain. Or any group of players the bands together, determined to make their mark in one of the sports world’s most iconic competitions.