Will Defense Doom the Nets? History Says It Could. (Part 2)

In the last part of our deep dive into the potentially catastrophic defensive shortcomings of the star-studded Brooklyn Nets, we looked into just how bad they are at stopping their opponent in multiple facets of the game, and where their struggles rank in the current NBA. Today, we will look at the side of the ball that keeps Brooklyn afloat despite their porous defense, their dominant scoring, and how teams with similar structures to the Nets have fared throughout league history.

The only reason any sensible NBA franchise would willingly assemble a roster with as little defensive prowess as the Nets is if that group has an unparalleled ability to put the ball in the basket. Both on paper and in practice, Brooklyn has demonstrated that. Not only do they tout three of the most lethal individual scorers in the league– James Harden, Kyrie Irving, and Kevin Durant, but they have enough shooting and rebounding around them (Joe Harris, Jeff Green, Deandre Jordan, Timothe Luwawu Cabarrot) to create five-man lineups that no opponent can hope to truly shut down.

First and foremost, outside of their ridiculous volume, the Nets are one of the most efficient shooting teams in the NBA. Taking smart shots and making the most of every individual possession is essential for winning basketball, and Brooklyn’s commitment to that principle will bode well for their offense come playoff time.

In terms of pure shooting percentage, (which is not always the best indicator of efficiency because it fails to factor in the added benefit of three-pointers and free throws) Brooklyn is the class of the league, making just a shade under half their shots at 49.8%. They are also 4th in 3P%, cashing in exactly 40% of their triples. Both of those numbers take the entire season into account, not just the time with Harden on the roster, so they’re likely to climb even further.

In terms of individual scoring efficiency, the Nets are also elite. The league average for True Shooting % this season is about 56.8%, and out of the Nets’ regular 9-man rotation, 7 players are above that mark.

It is clear that Brooklyn’s roster is loaded with adept scorers, but to a degree, we knew that already. Irving, Harden, and Durant are just as good offensively as they were expected to be, but recognizing the contributions of Brooklyn’s supporting cast is vital to determining how far their offense can take them. This array of talent has led the Nets to the highest TS% in the league at 61.8, nearly two percent higher than the second-place Los Angeles Clippers.

Brooklyn also ranks second in the league in total PPG, just 0.2 behind the first-place Milwaukee Bucks. Again, this figure factors in the time before Harden, when the Nets were still great offensively, but not quite the polarizing dynamo we’re attempting to break down here. In terms of offensive rating (total points per 100 possessions) Brooklyn ranks 3rd for the season overall at 117.2, but first since trading for Harden, a promising sign for the future.

Their points per possession would likely be even higher if it weren’t for the one area they consistently struggle with offensively: turnovers. The Nets turn the ball over 15.4 times per contest, the 4th worst figure in the league, and have a Turnover% of 13.6, also 4th worst. This likely stems from the score-first nature of their three primary ball-handlers– too many cooks in the kitchen can often produce high turnover numbers.

Fortunately for Brooklyn, their own propensity for giving the ball away seems to be the only thing capable of slowing them down thus far. They are near or at the top of the league in nearly every offensive metric (even FT%, where they rank 4th!) There may be no greater opposites than how stellar the Nets are on offense and how decidedly awful they are on defense. But how have other teams like them fared in the course of NBA history? Can we learn anything from “All O, No D,” teams of the past? Absolutely.

What the Past Teaches Us 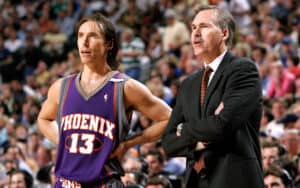 Just within the personnel Brooklyn has on their coaching staff currently, there is a wealth of experience in high-flying, low-defending schemes. Head Coach Steve Nash and Assistant Coach Mike D’Antoni (or Antoni, as many call him) attempted to answer the question of how far elite offense can take you nearly 15 years ago. Then, D’Antoni attempted a similar approach with Harden and the Rockets throughout the last few seasons. Now, the band is all together, throwing every shred of defensive commitment out the window in favor of maximum scoring potential and taking their previous experiments to the absolute extreme

However, even those Phoenix and Houston teams weren’t nearly as bad as Brooklyn defensively.

Based on the past finishes of teams that heavily rely on their offensive firepower, the Nets are going to have a truly transcendent level of scoring throughout the season and into the playoffs if they want to fulfill their championship aspiration. No Suns or Rockets team had as poor of a defensive rating as the Nets, yet neither franchise made the Finals during their “score first, ask questions later,” era. That doesn’t bode well for Brooklyn, who will need an even heavier dose of offense to keep up with their Eastern conference contemporaries.

However, it is important to balance this grim declaration with the fact that the Nets are entirely capable of producing that mammoth offensive load: since the trade for Harden, they have the highest offensive rating in league history. It is difficult to quantify the potential of a team that is statistically unlike any we’ve seen before, both in terms of their offensive highs and defensive lows.

Speaking of defensive lows, the Nets are currently competing with the middling Sacramento Kings to see which can set the record for the worst defensive rating in team history. There is little to no historical precedent for a team this awful on defense having any legitimate success– the top 5 worst defensive teams in NBA history have a combined record of 101-243, according to Bleacher Report.

If there were ever a team that could buck that horrid trend, it would be one with an offense as potent as the Nets’, but it is far from an encouraging sign moving forward.

Outside of pure statistics, the Nets’ thin roster from the Harden trade has made them subject to a lack of rotational versatility. This has forced Nash to get creative in tight 4th quarters, implementing unique defensive strategies with various levels of success. Perhaps the most prevalent example of this occurrence was when Luwawu-Caborrot, 6’7” played significant minutes at Center against the Philadelphia 76ers and Joel Embiid. This particular move did not bear fruit, with Brooklyn going on to lose, but others have.

Since trading for Harden, Brooklyn has a record of 4-1 in games decided by 5 points or less. This shows an ability to make the necessary defensive plays when it matters most, at least some of the time. Those games included a performance against Milwaukee where they held the Bucks to 28.9% from three and denied Khris Middleton a potential game-winning three, a win over Miami in which the Heat score a measly 14 points in the final frame, and a victory over the Clippers in which Brooklyn forced a Kawhi Leonard miss on a crucial floater with less than 30 seconds remaining. Nash has also done a solid job of making sure Jordan has help defending the paint, and although the Nets defense is still awful, their coach has done everything he can to squeeze out wins with it.

Since their assembly, the Nets have been one of the most polarizing teams in NBA history, and it’s been less than 20 total games. It is very easy to imagine a world in which Brooklyn tears through the playoffs in an unstoppable fashion, raining buckets en route to an NBA title. But a reality in which the Brooklyn supernova implodes under its own weight, crumbling in the biggest moments as their horrific defense is exposed, is just as easily imaginable. If we believe what history tells us, the latter is more likely. But can the past accurately gauge the ceiling of a group that has a more lethal offense than anything the history books can offer?

I do not believe so. The league is constantly changing, and we must while our understanding of the past can help influence our attitude toward the present, we cannot allow it to rule our perception. This is not to say Brooklyn will certainly emerge with the Larry O’Brien trophy, but we owe them the chance to prove their mettle independent of their defensive ancestors.

Doom could very easily be on the horizon in Brooklyn, but regardless of the eventual destination, the journey will offer plenty of fireworks– both for the Nets, and their opponents.