In the wake of his 4th NBA Championship and 4th Finals MVP, no one is more acquainted with that idea than one LeBron James. Despite being one of the most accomplished and dominant athletes to ever lace up a pair of Nikes, James has also become one of the world’s most criticized athletes during his time at the top of the sport. Whether it be his poor Finals record, his outspokenness off the court, or the fact that he is the first player to truly challenge Michael Jordan’s status as the greatest of all time, James’ haters have found plenty of reasons and motivations to belittle the legitimacy of his accolades.

His first title with the Los Angeles Lakers is no different. As soon as the buzzer sounded after the Lakers’ Game 6 Finals victory over the Miami Heat, an unfortunate sect of the basketball community rushed to create their onslaught of reasons why this ring didn’t really count.

One of the most prevalent critiques of the Lakers’ recent Finals run was the level of competition they faced en route to their 17th championship. Prior to the start of the playoffs, many NBA fans had visions of James and Kawhi Leonard dueling it out in the Western Conference Finals, and the winner of that matchup battling Giannis Antetokounmpo and the Milwaukee Bucks in the climactic series. However, when Leonard’s Clippers and Antetokoumpo’s Bucks both fell in the second round, we were robbed of that potential basketball nirvana.

That’s right: Leonard and Antetokounmpo’s teams lost. Many would like you to believe that James and the Lakers were somehow at fault for their titanic competition sinking early. Los Angeles simply played the teams that were placed in front of them, and in most cases, dominated them. Why then, does James take the fall for his rivals’ shortcomings?

This critique inherently relates to the expectations of a team prior to facing off with the Lakers, and after Los Angeles has beaten them. Prior to their first round matchup, the Portland Trailblazers were a wildly popular pick to upset the Lake Show, bouncing them from the bubble before they even had the chance to say “Cancun on 3!” This fervor only increased after Game 1, when Portland won a hard-fought battle on the back of a masterful performance from Damian Lillard. Portland was the best 8th seed team ever! They could really do this!

Then the Lakers won in 5. And the Trailblazers became “weak competition.”

A similar attitude surrounded the Houston Rockets heading into the second round. The Lakers had little to no defensive prowess in the backcourt, and many saw this as an exploitable weakness for Houston, who featured one of the most talented guard tandems in recent memory with Russell Westbrook and James Harden. The Rockets’ mad scientist small ball got the better of L.A. in Game 1, and it looked like they could be the team to deny James a chance at a fourth title.

Then the Lakers won in 5. And the Rockets became “weak competition.”

Despite not getting the fabled “Battle of L.A.” that we had been awaiting all season in the Western Conference Finals, it was still billed as a marquee matchup. The Denver Nuggets, fresh off back-to-back 3-1 comebacks, fielded perhaps the best Center in basketball in Nikola Jokic, an exploding supernova in Jamal Murray, and a hot young roster that had just finished dispatching a team who many saw as the Lakers’ greatest competition. This would be a true battle.

Then the Lakers won in 5. And the Nuggets became “weak competition.”

Do you see the inconsistency here? Public perception of almost all the Lakers’ playoff opponents heading into the matchup was that they could, or would knock off the famed franchise. However, once L.A. imposed their might, that same opponent was rebranded as a sacrificial lamb, a squad that was never really equipped to take down LeBron and Co. This is not to say that the Lakers faced a remarkably difficult path to the championship in terms of opposing talent, as there have certainly been harder paths throughout the course of NBA history. But that’s not something you can blame them for. Just because the Clippers and Bucks fell short of expectations does not make the Lakers’ championship any less valuable (don’t forget that L.A. ended up defeating both the teams that dispatched their rivals).

When considering the Lakers’ path to the title, do not remember their foes with the negative, retrospective view that many do, but remember them as the team that “had a really good chance at beating the Lakers,” before getting stomped.

I know you probably think I forgot to mention the upstart Miami Heat, but don’t worry, they’ve earned their own category. 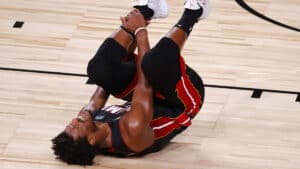 Another commonly cited complaint against the Lakers’ title is that their Finals opponent, the Heat, were hampered by injuries that took them out of the series before it truly began. In a sense, this is true. Miami did spend several games without the help of Bam Adebayo and Goran Dragic, two pieces that had been crucial in their Cinderella run to the championship round.

However, there has not been a champion in the last 5+ seasons that was not significantly aided by key adversaries missing time.

As you can see, this is far from the first time that a team has lost key players in the postseason. James himself has been a major victim of this unfortunate occurrence. But for LeBron detractors, it only works as an excuse when it benefits the King’s opposition.

Not to mention the Lakers were also without Avery Bradley for the entirety of the bubble, who at times this season was their third best player, and without Rajon Rondo for the seeding games and first round. Again, injuries are only acceptable to mention when they go against James.

Nonetheless, neither of these critiques of the Lakers’ championship come close to the magnitude of the final complaint we’re going to cover: the environment in which they played.

In a world where every human being is attempting to deal with a new form of normal, the NBA is no different. After the league shut down due to the coronavirus pandemic, many wondered whether there would be a champion crowned this season at all. When the league announced that they would be returning in a bubble format, the basketball world rejoiced, as no matter what form hoops was returning in, returning at all was a huge victory.

For NBA players who are used to being treated like deities everywhere they go, playing in an isolated environment like the bubble was an intensely difficult transition. Many complained about the quality of the food, the luxury of their lodgings, and the hardship of not seeing their friends and family for such an extended period of time. It was far from an ideal situation, but it was one everyone had to endure.

Unfortunately, since the Lakers were crowned champions, some fans have begun to make the ridiculous assertion that this championship was somehow easier to win than others because of the bubble environment, or that L.A. deserves an asterisk next to their title because it wasn’t played in opposing arenas or with fans in attendance. Frankly, this is a foolish claim to make.

Firstly, in no way did the Lakers benefit from the bubble environment than anyone else. If anything, they were more disadvantaged, as Staples Center during the playoffs is one of the strongest home-field advantages in all of sports, and it is one that they were unable to benefit from. Every team and player was forced to stay in the same sphere under the same harsh conditions. If the Lakers deserve an asterisk, then any team would have, and I find it difficult to believe that those same detractors would be applying that negative distinction to the championship had it been won by the Heat, Nuggets, or any team other than LeBron’s.

And, if anything, the Lakers (or any team who won the title in this environment) deserve more kudos due to the additional strife they had to face in their title run. I’m far from alone in that opinion. Plenty of voices around the NBA voiced a similar sentiment when the bubble was just beginning, and it wasn’t clear who would come out on top:

“I feel like at the end of the day this is going to be, like, the toughest championship you could ever win because the circumstances are really, really tough right now. So whoever wants it more is going to be able to go out there and take it.” ~Reigning two-time MVP Giannis Antetokounmpo

“I think this might be certainly the most worthy of all world championships in the NBA because of all the things that every team is going to have to navigate and overcome to be able to be crowned a champion.” ~Miami Heat coach Erik Spolestra, two-time NBA champion

“If you’re able to go into a bubble to be isolated from your friends and family, to have no home court advantage, to have a league interruption of four months, and you’re able to spend 90 days and come out of there a champion, I think this will be the toughest championship ever won. There’s no asterisk. You win an NBA championship anytime, it’s a hell of an accomplishment. But in these circumstances, these unprecedented times, with everything going on… I think it will be a remarkable accomplishment.” ~Denver Nuggets coach Mike Malone

“This is going to be a super unique situation, and whoever wins it is really going to earn it.” ~Boston Celtics coach Brad Stevens

“He [Adam Silver] said that the team that wins this will deserve a gold star, not an asterisk. […] There’s going to be so many things that are thrown at us that we don’t even know yet. It’s really going to be a mental toughness challenge.” ~Then Los Angeles Clippers coach Doc Rivers discussing a conversation he had with NBA Commissioner Adam Silver

If you need further convincing then the accounts of these brilliant men to believe that this title run was, if anything, much harder than normal, I’m not sure what more to tell you. Every single player in the NBA would have preferred a normal playoff atmosphere with fans, regular arenas, and the ability to engage with those they love. Not a soul went in licking their chops at the thought of an “easy championship.” To assert that this title is any less valuable because of the brutal scenario in which it was played could not be further from reality.

The Los Angeles Lakers, LeBron James, and the rest of their roster deserve just as, if not more credit for their 2020 championship than any other team in league history. Though James is one of the most scrutinized to ever play the sport, sometimes for good reason, this is not a valid criticism of his accomplishment.

This championship deserves an asterisk, not for being easier than others, but for being uniquely challenging in a way no other title ever has been.