What Makes the Bucks Defense the Best in Basketball.

Throughout most of the 2010s, the dominant term used to describe the uber-talented teams that dominated the NBA was superteam. A word that strikes fear into anyone who dares read it, superteam describes rosters that are bursting with talent so excessively that the legitimacy of their success comes into question. Whether it was the Big 3 Heat, the KD Warriors, or any of the other lesser superteams along the way, the team that owns the league’s top record has often been composed of recognizable faces and an embarrassment of superstar talent.

Over the last two seasons, though, a new top regular season dog has emerged: the Milwaukee Bucks. Since Giannis Antetokounmpo’s ascension into MVP status at the dawn of the 2018 campaign, the Bucks have been a runaway train that’s difficult to stop for anyone that challenges them. They are led by Antetokoumpo, sure, and Kris Middleton is a darn good second option, but the DNA that makes up Milwaukee is entirely different from the talent-centric teams of years past. They rely on Giannis for a large portion of their offense, but use a stout defense, great offensive sets and a sense of group accountability led by coach Mike Budenholzer  to morph into a team that may have won 70 games if all went according to plan this season.

Now, back to the defense part.

Most NBA fans are aware of Antetokounmpo’s defensive chops- he may very well become the third player in league history to win the MVP and DPOY awards in the same season. However, what doesn’t get enough attention are the efforts of the less-heralded Bucks, as well as the nuanced strategies that give them the sport’s most impenetrable defensive front. Today, we’re going to shed some light on them. 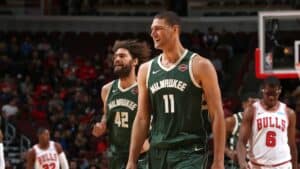 Perhaps the most distinct facet of Milwakee’s defensive identity (something that is a near-necessity if you want to succeed on that end) is their commitment to contesting shots at the basket. They allow the fewest rim attempts in the NBA, and those that they do allow are seldom easy. Part of this is due to Antetokoumpo’s length and disruption, but a large portion can also be attributed to a tactic that I like to refer to as “The Lurking Lopez.”

Brook and Robin Lopez, twin brothers, are essentially twin players too, at least defensively. Both are big, strong, and protect the rim with extraordinary power. They play a combined 41 minutes per game, and their play is often staggered, so for the sake of this example let’s assume that either Brook or Robin are on the court for 85% of the game.

Budenholzer is very aware that the Lopezs’  biggest strength is deterring and swatting shots at the bucket, and he uses this to the team’s full advantage. Even when guarding stretch 5s or other bigs that have shooting potential, Budenholzer has the Lopez twins sag far off of their man whenever they leave the paint, ensuring that no backdoor cuts can be executed and no slashers drive to the rim unscathed. The strategy toys with the league’s defensive 3-seconds rules, but since the Lopezs are technically guarding their man, they are seldom penalized.

This allows whichever twin is currently in to essentially take on the role of pure rim protector. If their assignment should wander back into the post, they’ll pick them up again, but still remain cognizant that playing help defense on drives is their main concern. Brook averages about 3.3 blocks per 36 minutes, with Robin adding around 1.8. Blocks certainly aren’t the best way to measure a player’s defensive impact, but hopefully they provide a sense of how rim-oriented the Lopez twins are.

This approach can sometimes lead to struggle with stretch bigs (the Denver Nuggets and Nikola Jokic were one of the few teams to deal Milwaukee multiple losses this season) but overall it aligns with the Bucks’ overall defensive philosophy: threes are okay as long as we defend the basket. I can’t provide film examples, but watch out for the Lurking Lopez next time you tune into a Bucks game. As long as it’s not against your team, seeing this beautiful basketball strategy crush guards and forwards in the paint will be sure to warm your heart. 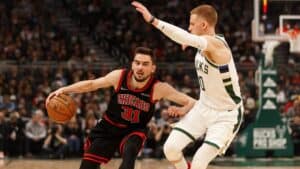 Plenty of teams throughout league history have had great paint defenses, but few have put together a shield quite as potent as Milwaukee’s. That’s because the Bucks also boast a variety of tremendous perimeter defenders that help limit jumpers, slow transition opportunities, and try to prevent the Lopez twins from even having to lift a finger by closing off driving lanes.

The unquestioned leader of this group is Eric Bledsoe, the Bucks’ starting Point Guard. He is the cog through which the rest of the team’s perimeter defense rotates. Bledsoe’s excellent quickness and peskiness as an on-ball threat make him a menace for heavy ball-handlers. His synergy with the rest of the defense also allows for better execution of another Bucks tactic we will discuss more thoroughly later.

Middleton and Wesley Matthews fill out the rest of the starting five, and while Middleton’s versatility makes him another key piece of the Bucks defensive front, Matthews is the real perimeter lockdown. Never giving up on a play and balling with a sky-high motor, Matthews is one of the most bothersome wing defenders in basketball. He gets back tremendously well in transition, and makes it extremely difficult for opposing guards to get to the basket. Every jumper against Matthews is a contested one, and his high basketball IQ makes backdoor burns seldom and smart double teams frequent.

Even when the starters sit, Milwaukee’s bench is equally elite in guarding outside the paint. Donte DiVincenzo, George Hill, and Pat Canaughton all fill in seamlessly for their starting counterparts, just like Robin Lopez does for Brook. DiVincenzo is especially stingy, providing a level of bounce and hustle that wasn’t even his main selling point coming out of Villanova a few years ago. Similar to the Lopez strategy, many of the Bucks perimeter players will sag slightly off their man, worrying more about the drive and knowing that they have the length to disrupt attempts even after giving space.

We’ve covered just how dominant Milwaukee is at defending both the rim and the perimeter, with their entire system centering around the former pursuit. But without nuanced decisions and adjustments, none of it matters. 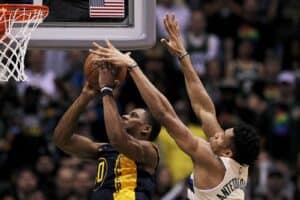 Perhaps the most helpful side effect of having so many individually great wing defenders is that they’re all quick, strong, and aware enough to neutralize the offense’s screen game. It’s a conscious decision by Budenolzer that the Bucks almost never switch, which would be a catastrophic idea for most teams, but work tremendously with Milwaukee’s stellar personnel. This disrupts spacing for the opposition, and more importantly, allows the Bucks to maintain their handpicked, favorable assignments.

Chemistry is also key for the group, and this allows them to alert one another of potential picks before they arrive. Even if a screen is successful, Bledsoe, Matthews, and DiVincenzo all have the motor and recovery speed to quickly return to the play, and even if they get burnt, a Lopez is always waiting at the rim to challenge any potential takes.

This approach also virtually eliminates slip screens from the offense’s bag of tricks, as the slip is useless if the defender was never planning on switching. Every once in a while, Milwaukee’s anti-switching strategy gets torched for an easy basket, but it’s not nearly enough to counteract the immense advantage it provides.

Double teams and overall group swarming are the final facet of the Bucks’ D we’ll be covering today, and it has a case for the most important.

Help defense is the foundational concept upon which the rest of that side of the ball can evolve past simple man assignments. Despite their commitment to negating screens and the stationary nature of their Centers, the Bucks also swarm to the ball with some of the highest intelligence and aggressiveness in the league. This is most common on drives, where an intrepid slasher will have to face their assigned man, a Lopez, and likely another long-armed help defender before getting the chance to put up a shot at the basket

That approach also helps limit second chance points. Milwaukee allows 11.1 of them per game, the lowest of any team in the league. If by some miracle an opposing big is able to snag a board away from one of the Lopez brothers or Antetokounmpo, they’ll be immediately triple or quadruple teamed, effectively destroying any chance they have at capitalizing on the opportunity. Second chance points can be a back breaker if not held in check- the Atlanta Hawks allow 15 a night, by far the most in basketball, and are 28th in defensive rating. Keeping opposing possessions to a single shot is the final piece to the Bucks’ phenomenal defense, and one they employ better than any other team.

Milwaukee has elite defenders everywhere on the floor, from their Lurking Lopez twins to their scrappy perimeter clampers. Seldom do they make mistakes or fall out of line, always aligning with the central idea of limiting easy shots at the bucket.

And in the rare case that they do have a lapse? The likely defensive player of the year is always around to clean up any mistakes.

That thought is what makes the Bucks’ defense so terrifying for opposing players and coaches, and what has propelled them to the league’s top overall seed. To truly get a sense of how dominant that front is, if you haven’t gotten it already, let’s end by looking at some raw statistics.

The Bucks are first in the league in defensive rating, a whopping 3.6 above the second place Toronto Raptors. They are first in defensive rebounds and defensive rebounding percentage, leading the next best team by about 4.6 and 2% respectively. They are top ten in limiting points off turnovers, and first in opposing second chance points, as we said previously. And finally, in accordance with the cardinal rule of their scheme, the Bucks lead the league in preventing points in the paint, letting up just 38.8 per game. The next closest team is upwards of 42.

Whether it be the eye test, their individual personnel, or the pure numbers, Milwaukee’s defense emerges as the best every single time. The only question remains whether or not they can maintain their impenetrable front, and if it will be enough to deliver the Larry O’Brien trophy.

Huge shoutout to Coach Daniel on YouTube. His video on the Bucks defense was the foundation for many of my points and observations in this piece.