Cleared For Takeoff: The Crazy Genius of the Rockets’ Ultimate Small Ball Lineup

In basketball, a sort of annual pattern can be detected as we approach the season’s home stretch. As the final weeks before the All-Star break begin to wind down, a sense of familiarity begins to fall over the typically hectic NBA. Although the trade deadline is still to come, the basketball world has seen over 50 games of action from each team, and we begin to make our assumptions about each team. Their most crucial contributors, their chance at the title, and their on-court philosophy. However, with the Houston Rockets’ dealing of Clint Capela at the trade deadline, they have fully committed to a tonal shift they had been teetering on all season long: the Ultimate Small Ball lineup.

When Houston brass made the decision to ship their longtime Center to Atlanta as a part of an enormous deadline deal, they undoubtedly knew it would be a controversial move. However, it’s hard to say they could have predicted the firestorm it would set ablaze throughout the sports world. There had been rumors of Capela’s impending departure for weeks, and Houston had found success with their ultra-small lineup in games where he was injured, but the actual realization of the startling move was shocking nonetheless.

Essentially, the new Houston starting five that does not feature a player above 6’6″ is an aggressive assertion or the way basketball has changed. The spacing renaissance of the past decade has revolutionized the role of everyone on the court. The Rockets have been perhaps the team that has leaned most heavily into the change. In 2018, they became the first team in league history to take more 3-pointers than 2-pointers. In that season, they took less mid-range jump shots than DeMar DeRozan alone. Mike D’Antoni has flung himself full-throttle into the hoops revolution, even taking it farther than its initial creators, the Golden State Warriors.

Despite their commitment to the 3-ball, Capela had been a mainstay for much of the Rockets’ postseason success. In addition to their barrage of triples, Houston also focused on shots at the rim, and Capela was perfect for this part of the attack. He could rim-roll off of screens, gobble up offensive rebounds, and defend Houston’s own basket at the other end. Offensively, his ability to create was not dominant, but it didn’t need to be; he was perfectly fine catching lobs and hammering down easy slams. His role in the way Houston operated was essential, even though he was not one of the league’s most elite bigs.

What changed, you may ask? The ball-handler in charge of feeding Capela on those lethal pick-and-rolls. 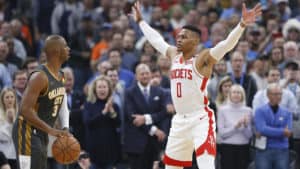 When the Rockets traded Chris Paul for Russell Westbrook, it was widely accepted that they would be altering the way their offense operated. Paul made his living off of efficient scoring and pin-point passes, never fielding a Usage Rate of above 25%. Westbrook is a volume scorer who requires the ball in his hands to create for himself and others. His career high in USG% is a whopping 41.7%, and he’s at about 34.2% so far this season with Houston. They are completely different players, and both fit completely differently alongside James Harden.

Another fundamental difference in the pair’s games, and the one that spawned Capela’s departure, is the way they play in the paint. Paul prefers to live in the perimeter and mid-range areas, while Russell Westbrook leads the NBA in PPG in the paint over the last month. One relies on their skills to stay away from the post, far away from the league’s giants. The other uses their athleticism to repeatedly go in amongst the trees and emerge victorious.

That’s where Capela comes in.

With the arrival of Westbrook’s paint-centric style of scoring, the Rockets’ ever-innovative spacing hit a snag. They were still winning games, but it was evident that they weren’t utilizing the complete offensive potential of their personnel. They needed to find a way to unleash Westbrook’s full potential, but were they really willing to play without a true starting big man?

In true Rockets fashion, of course they were. Always willing to push the envelope and commit fully to the league’s hottest trends, they shipped Capela to Atlanta as a part of a huge 4-team deal as the trade deadline loomed. Although the deal occurred February 5th, Capela played his last game for the Rockets on January 29th in a loss to the Portland Trailblazers. Without him, in games against the Mavericks, Pelicans and Hornets, Houston was 3-0, with an average point differential of +14.7. While the plans were already laid to oust Capela, their success without him in this stretch likely emboldened their extremely risky choice.

It’s worth noting that in return for the burgeoning big Houston received Robert Covington, the perfect 3-and-D player to compliment their current attack. Adding him to the fold will help the Rockets attempt to pull off one of the most daring endeavors in basketball history: starting 6’6″ PJ Tucker at Center. Tucker plays big; he gets offensive rebounds, can man up opposing Centers, and is one of the most accurate corner 3 shooters in the league to boot. However, his playstyle cannot make up for the size of a traditional Center. And that may not necessarily be a bad thing.

With Capela clogging up the middle, for better or worse, the Rockets had a dilemma on the offensive end. Due to his record-setting scoring numbers and incredible ball-handling, James Harden would often be picked up by the defense close to the halfcourt line. This often led him to dump off the ball to Russell Westbrook, putting him in a precarious position. He can fire the 3 in spite of his poor perimeter shooting percentages, he can drive in for one of his patented mid-range pull ups or acrobatic layups (potentially attracting Capela’s defender), or he can run the offense through someone else on the floor. This is where the difference between Westbrook and Paul is most noticeable.

The situation previously described is one where Paul repeatedly thrived. He was a more efficient shooter than Westbrook, and better skilled at finding the open man off of a dribble penetration. However, he was not as well-equipped to drive to the basket, meaning he and Capela seldom disturbed each other’s spacing. This difference is a massive one, and was felt throughout the first half of the Rockets’ season.

With Capela out of the fold, the D’Antoni system can truly reach its full potential. Houston will miss Capela’s rim protection, his lob-catching and his oodles of rebounds, but without him they have the chance to take the current basketball revolution even further. In their most recent contest, a thrashing of the Warriors, Houston started Harden, Westbrook, Daniel House Jr., Covington, and Tucker. Excluding Westbrook, the quartet is averaging a 37.4% 3-point shooting clip on the season, and with them all living on the perimeter, Westbrook is free to run wild in the paint. On the evening, the team shot 51% from deep and emerged from Chase Center with a 20-point victory to return from the All-Star break. While the Warriors are not a very good basketball team this season and it was, by all accounts, a hot shooting night, this could be a sign of things to come for Houston.

The wackiness of the Rockets’ new philosophy is what  has caused many in the basketball community to question their trading of Capela. The idea is easy enough to understand offensively, but the fear is that Houston’s new 5 will be eviscerated by opposing big men without a true check for them defensively. This is a reasonable concern, especially given that the Rockets’ superstar guard duo has had their defensive struggles in the past. Seldom does Houston sub in either or their 7-foot reserves for defensive help (Tyson Chandler and Isaiah Hartenstein). Instead, they rely on their more gritty defenders, including Harden, to limit opposing Centers in the post.

In their 6 games without Capela in which they’ve played a team with a “Center” listed in their starting lineup, said big men have averaged just 8.5 PPG against the Rockets diminutive lineup. This is not including a 35-point effort by Kristaps Porzingis and a 32-point night from Anthony Davis, who are listed as Power Forwards, but the Rockets still emerged with the win in both of those games. We even got to see Harden’s sharpened post defense shown off against Joel Embiid in the highly-competitive 4th Quarter of the All-Star game. The concerns over the defensive schemes surrounding Houston’s new lineup are legitimate, but their lack of size has not been costing them games.

Overall, the Rockets groundbreaking new starting lineup has the potential to lead them deep into the postseason, but it is likely not a scheme many teams will be able to copy. Their unique personnel is what allows them to utilize the advantages of small ball so well. They have the league’s best isolation scorer, the league’s best driving Point Guard, and bevy of long-range snipers that space out the floor around them. With their current core under contract for years to come, we will likely see plenty of beautiful basketball from this crazily concocted lineup. For the good of the sport, we can only hope they live up to their full, boundless potential.